View source
This article is about the heroic Autobot maintenance engineer - for his evil Shattered Glass counterpart, see Hoist (SG). 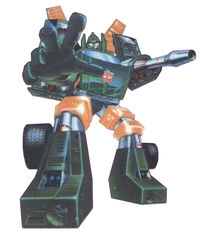 If Ratchet is the Autobots' chief surgeon, then Hoist is their family doctor. Everyone reports to Hoist for routine check-ups and maintenance, no exceptions! A jovial, friendly robot, the up-beat Hoist enjoys his job and it shows. He speaks with a cultured British-sounding accent and can usually be found playing "Dr. Watson" to his friend Grapple's troubled artist in his off-hours.

As a Toyota Hilux tow truck, Hoist can haul up to 400,000 pounds. In robot mode, he is one of the strongest of the Autobots. From his wrist sockets, he can launch heat-seeking missiles up to 4.5 miles. The full spectrum multi-sensor module he wears behind his head can determine an object's composition, density, tensile strength, energy properties and often even its function with a mere sweep of its triple beams. The beams have an operating range of 1200 yards, making Hoist an effective and valued scout at times.

Hoist's dedication to his job sometimes blinds him to the precedence that armed conflict often takes over it. He lacks speed in vehicular mode, and has a high fuel consumption rate.[1]

In the early days of the Decepticon uprising, Hoist commuted regularly from Kalis to Ibex on a passenger shuttle.

Hoist was among those at Autobot headquarters when the Dinobots attempted to show off how civilized they'd become. During the ensuing destruction, he watched Red Alert and Inferno rush to put out the fires.

Hoist and Grapple proposed the construction of an enormous Solar Power Tower to Optimus Prime, even showing him a darling little functioning model. Prime rejected the idea, and Hoist tried to console his friend, but Grapple was determined to find some way to built it. They encountered the Constructicons, who claimed to have left Megatron's cause and wanted to help them construct the tower. Though Hoist worried that it was a trick, he and Grapple let the Decepticons help them build the tower, at which point Megatron turned up and had the pair of them sealed into a sheet of metal and installed in the tower. It wasn't until after the other Autobots had demolished the tower that Hoist and Grapple were broken out of their improvised prison. Hoist assured Grapple that there would be other towers to build.

Hoist was present for the first demonstration of the Negavator. When Soundwave attacked the bunker and trapped the Autobots inside, Hoist and Grapple cleared the entrance so they could retaliate. As Hoist surveyed the damage, he heard Red Alert calling out and dug the security officer out from under some rubble. Hoist began to drive the Negavator back to headquarters with an Autobot escort, but the Decepticons made another attempt to grab the weapon, and this time Hoist and Grapple were forced to dig Optimus and Ironhide out from a rock slide. The Autobots realized something was wrong with Red Alert, but lost him on the city streets. Hoist drove the Negavator back to the bunker, and eventually, Red Alert turned up again.

When Megatron located the Heart of Cybertron, Hoist was among the Autobots who traveled to South America to stop him obtaining the artifact. Unfortunately, they were too late, and they received a pounding courtesy of the powers granted to the Decepticon leader. They returned to base in a rather battered condition.

Along with the rest of the Autobots, Hoist was banished from Earth on a spaceship after Megatron framed the Autobots using a faked video recording.

Though the spaceship was locked on course for the Sun, the Autobots were able to abandon it and, with the help of Cosmos and one of Trailbreaker's force fields, return to Earth. There they fought back against the Decepticons and freed the enslaved humans.

Following a disastrous battle at an airport, Hoist, Red Alert and Inferno turned up to drag the damaged Dinobots back to base for repairs. No sooner were said repairs done than the Dinobots up and left. Hoist was on the subsequent mission during which the effects of cybertonium depletion became apparent, but like the other Autobots, he managed to limp back to base, where he remained until fresh cybertonium could be fetched.

Blaster's loud music resulted in Hoist being too late to prevent the theft of the Voltronic Galaxer. Megatron subsequently used the device to jam radio transmissions across the planet, and Hoist, Prowl, Ratchet and Trailbreaker had to help a bunch of snowed-in motorists. Hoist caught one hapless fellow whose car plunged off a cliff.

During a spot of gosh and bother with some frightfully rambunctious ruffians, Hoist and Warpath were transported backwards in time to medieval England. The trio encountered Nimue and her father, Sir Aetheling the Red, who were holding a jousting match. Hoist whipped up a suit of armor for Spike Witwicky so he could take part, but the Decepticons abducted Nimue during the tournament, and the Autobots were too low on energy to catch up. Sir Aetheling led an assault on Sir Wigend du Blackthorne's castle, and Hoist acted variously as a bridge across the castle moat and a siege ladder, until both he and Warpath were exhausted of energy and unable to fight on. The wizard Beorht gave them a boost of energy, and the two Autobots breached the castle wall, pretty much ending the feud. With more help from the wizard, they were able to return to the nineteen-eighties.

Hoist also drove the lorry Huffer once (how he fit in the cab is perhaps a question best left unasked), and he was jolly well cross at a ghastly traffic jam. Of course, being a tow truck, he could just get out and tow the broken-down car away.

Hoist and Grapple had their mitts full with repair work after the Autobots suffered frightful injuries against the fully fed Insecticons. At least he got to spend some time with Skids. (That poor boy does seem to vanish ever so often.) Hoist later went along with Prime's rescue party to recover Cosmos and the robotic insecticide he recovered to deal with those awful creatures. The poor chap was in bad shape, so Hoist offered to give him the best overhaul he ever had. Cheers to that, old bean!

As Megatron unleashed the dreadful little Kremzeek on the Autobots, Hoist and Jazz were the first to be overloaded by the beastly thing.

After Blitzwing began randomly bombing a US city, Hoist rescued another motorist when a suspension bridge was struck. He and Smokescreen were guided through a Constructicon-built maze by Powerglide, allowing them to recover some of their comrades who'd been built into a sort of throne. Hoist had them all fixed in no time.

Following an unsuccessful search for some missing Autobots, Hoist was at Headquarters when Cosmos finally located their friends, being held captive by big game hunter Lord Chumley.

Following these misadventures, Hoist was out taking a drive with Spike and Carly when they witnessed a couple of cars crashing. Little did they know that it was a movie stunt, and Hoist's daring rescue landed him a role in the film. Unfortunately, a number of the other Autobots decided this was a great idea and joined in too. Hoist was mortified by his fellow Autobots and the fact that the director kept referring to him as "Moist", but took part in filming anyway. Before long, the director decided to rethink the script and instead make Attack of the Alien Robots. Hoist and his friends found themselves wearing silly masks and being blown up. As it turned out, the Decepticons were hunting Major Pictures studio for a reel of film, and Hoist helped Spike and Carly fake its destruction, prompting the Decepticons to leave. It later turned out that the secret weapon the Decepticons had salvaged was one of Wheeljack's old inventions that didn't work anyway. Hoist subsequently swore off the movie business.

Hoist was also one of the Autobots who traveled to Cybertron in Omega Supreme to try and stop the Decepticons creating the Stunticons. He and Ratchet were able to save the life of Alpha Trion. When they were too late to stop the Decepticons, Optimus came up with a new plan, and the Autobots set to work modifying some old cargo rockets into Earth-style jets.

The jet were brought to life by Vector Sigma as the Aerialbots. The Autobots returned to Earth in Omega Supreme, who broke down on arrival. Rather than help repair him, Hoist instead went with the Autobots to a rocket base under attack by Decepticons, only to come off second best against the Stunticons.

Hoist was briefly seen assembled with the rest of the Autobots before they drove off to rescue Perceptor from Fox Creek Canyon.

Hoist assisted in the capture of Breakdown and Wildrider while the Stunticons were assembling Megatron's latest new weapon. His laser cannon brought the chaotic Wildrider to a screeching halt. When reporting in to Optimus Prime, Hoist gleefully remarked how patching them up wouldn't be his job!

In the Middle East, Hoist and a squad of Autobots backed up the Aerialbots against Combaticon activities in the area. The Decepticons fled, but Slingshot was trapped behind an avalanche. Thanks to Skydive's knack for engineering, Hoist was able to get through the rocky debris and pull Slingshot to safety. He and Ratchet then patched him up at the nearby air field.

"You know why you can't get a handle on me? Because I'm an ordinary person. I'm normal. I'm just a mid-ranking maintenance engineer who takes each day as it comes. I'm not particularly chatty, handsome, or clever. But you know what? I get by. I manage. So don't dismiss me because - unlike your pals ... - my personality isn't the product of a crippling psychological disorder."[2]

Hoist is currently head of maintenance aboard the Ark, but often still works in Autobot City.

In 2015 Hoist was part of the crew on the ill-fated maiden voyage of the Spirit of Freedom, guarding the injured Ultra Magnus during the trip.

Hoist is available for application. Until then, he is occasionally temped by Bzero. For the Spirit of Freedom TP he was @emitted by Zerombr.