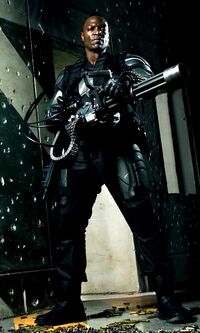 Roadblock is not the only G.I. Joe strongman with an unusual passion. When Heavy Duty goes to battle, it is classical music that flows inside his head. Heavy Duty is a rough-and-ready individual with a big heart and soul. He very much craves action just as much as the next Joe. But few would have ever suspected he knows Bach and orchestral music. At a very young age, Heavy Duty developed a passion for classical music and even became an accomplished classical guitarist. Playing the musical instruments gave Heavy Duty the edge in operating heavy weapons systems that require some specialization in operating them with both hands.

Growing up in Chicago, Heavy Duty surprised his parents when he developed a love of classical music. He even became an accomplished classical guitarist. When he enlisted at age eighteen, Heavy Duty became skilled at operating the Man-Portable Heavy Weapons System, finding it required the same skills as playing the guitar: left hand/right hand coordination and the ability to concentrate on simultaneous multiple tasks. Heavy Duty eventually became a member of the G.I. Joe team, serving with the team in the final years before its shutdown in 1994. Among his many missions, he helped defend the Pit in Utah from a surprise invasion by Cobra Commander and his troops.

Heavy Duty was reinstated along with the rest of the team in 1997. He served the team faithfully until 2009, when he was moved to the reserves.

In 2021, Heavy Duty was assigned to the crew of the Crusader on its trip to Nebulos, as heavy ordnance specialist.

He very well could be Roadblock's Cousin, as is mentioned in one Cartoon, G.I. Joe: Spytroops

Heavy Duty is available for application.