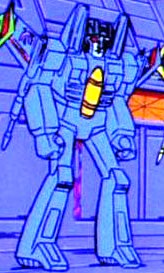 The Rainmakers served Shockwave on Cybertron during Megatron's four-million-year sleep.