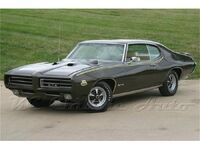 GROWLER isn't popular among the Autobots with expensive European sports car alternate modes. He's disdainful of newer, flashier sports cars; he thinks they're all looks and no guts. His vehicular form is that of a dark green 1969 Pontiac GTO Judge, a classic American muscle car, and he wouldn't have it any other way. He's frequently heard making mildly insulting comments in the direction of the other automobile-based Autobots, but what he lacks in tact he makes up in strength and courage. He's a tough guy but doesn't usually go looking for a fight, unless it's the right fight: he's happy to beat on Decepticons any day of the week. He's generally easygoing, but don't rile him up! In robot mode, Growler is a heavy hitter. He prefers to use his fists to take care of troublemakers, but if necessary he can rock their socks with his otherworldly sound system, which he can tune to send out devastating sonic blasts. In vehicle mode, Growler can reach top speeds of over 120 miles per hour.

Growler's voice is similar to that of Pigmeat Markham, a Vaudville actor. (Link to Pigmeat's "Here Come The Judge" on YouTube). Here's an image of the GTO Judge in Liberty Blue: ( from http://tinyurl.com/2a3wxz )

<The Autobot spinny is replaced by a scorched and battered-looking Growler.>

"I was driving my regular patrol route in the New York City region and picked up a distress call over local frequencies. Teletraan didn't show any other 'Bots in the vicinity, so I went in solo. The Decepticon Skywarp had chased off the majority of the human workers and was draining energy from a power plant. I tried to chase him off, but he was far too quick for me. Skywarp got away with a lot of energon." Growler pauses to let Lugnut realign a panel in his chest, frowning at the floor. "Official report ends." Growler scowls into the camera. "Off the record, lemme say that if I find that purple creep-bot again, I'm gonna make /sure/ to bring the pain!" He slams one metal fist into the other and winces. "I'll be back on my beat in no time, right Lugnut?" The Autobot medic's face is not visible to the camera, but Growler's response indicates it may take longer than he'd like to get back into action.

<Growler's face disappears as he switches off the camera, and the Autobot spinny returns to the screen.>

"I was traveling with Lodestone, patrolling the area between Autobot City and the strange portal in the desert. We'd heard there were Cobra people out there looking to make trouble for the local human forces. Lodestone wanted to study the portal, too. So we went to have a look. Sure enough, that android Over Kill and a group of his fellows were there, claiming the portal for Cobra. Lodestone and I took them on. He was handling Over Kill pretty well until he was called away unexpectedly. The weird little vehicle they had with 'em was tougher than it looked. It busted me up pretty good and I had to back off, leaving the Cobras to set up in front of the portal." Growler flinches and frowns off-camera. "Watch it with that door, son! Those hinges are fussy!" He looks back into the lens. "Far as I know Cobra's little team still controls the portal. Growler out."

Cobra forces have been ordered to take the Portal, Autobots and G.I. Joe stand in the way

Major Bludd catches a break and escapes from Burpleson, with the aid of the Baroness. Snoop likewise finds herself free.

"Growler reporting. I was with Optimus' repair and rescue crew out in Washington, DC on Monday. We were tryin' ta help get some things cleared out and patched up so the humans can start gettin' back ta normal after the floods, so of course the Decepticons came ta crash the party. Swish and Jee-Dai showed up to help bail our keesters out of the fire, thank Primus. The 'Cons flew off, but not before Megatron pretty near took Optimus' head off." He cringes, frowning. "Sorry, but it was a real nasty fight. Optimus gave as good as he got, true enough, but he looked a sight after it was all over. Jee-Dai, odd though that mech might be, helped patch me up in the field so I could limp back home with the other injured." Lugnut's mutters and grumbles can be heard in the background. "AND," Growler adds, with a glance to the cranky off-camera medic, "Lugnut here did the rest. I'm ready for active duty again whenever an' wherever y'need me. Growler out."

Growler was created and is played by Sydney