Grimlock is an evil Autobot Dinobot from the "Shattered Glass" universe. 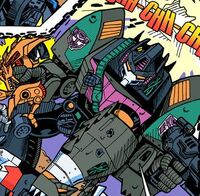 GRIMLOCK is a tragic figure. He was originally developed by the Decepticons as a soldier whose sentience would be based on artificial intelligence rather than an Ember. However, his violent subroutines overrode his logic programming causing him to destroy the facility that created him. Megatron was able to deactivate him and he was stored away, never to be used again. However, when Optimus Prime learned of this creation, he stole Grimlock and reactivated him. Offered a chance to revel in his violent tendencies, Grimlock eagerly joined Optimus Prime and serves as his most potent warrior. Grimlock will not stop tearing through the enemy ranks until they are all destroyed or he can no longer move. He simply cannot feel mercy and has little self control. "I wish I had a thousand more like him!" says Autobot leader Optimus Prime. Fortunately for the Decepticons, he doesn't.

Following an encounter with the Omega Terminus, Grimlock was granted an ember, a true cybernetic personality, and the ability to transform into a robot mode. In this new form, he is gifted with remarkable intelligence, a wicked scheming streak, and a delightfully wry sense of humor, wot? However, the mindless violence that once governed his thought processes has not been entirely excised; should robot-mode Grimlock lose his temper, he will involuntarily transform back into his dinosaur form, and his mind will be overwhelmed with the uncontrollable ferocity for which he is so well known.

Grimlock proved himself to be the smartest (and most humble) of the Autobots raiding the secret Pretender lab. Insulted by Goldbug relegating him to the position of mere attack dog, he nonetheless fell for a Predacon ruse and was ambushed by the Mayhem Suppression Squad.

When the deranged Autobot scientist Wheeljack succeeded in modifying and duplicating Grimlock's artificial intelligence matrix, he was able to give life to an entire herd of Dinobots. With Grimlock at the head of the pack, Wheeljack unleashed his creations into the middle of a battle between the Autobots and Decepticons, only for the mindless monsters to wind up fighting amongst themselves. As the out-of-control Dinobots proceeded to run wild across Cybertron, Grimlock began to hear a mysterious disembodied voice that gave him directions to follow, and he obeyed it without argument, pausing on his way only long enough for a minor altercation with Huffer. Trekking deep into the Rad Zone, Grimlock ventured into a series of tunnels that led him to the chamber of the life-giving mega-computer, Omega Terminus, the owner of the voice that had lured him into its presence.

Grimlock was hidden beneath a pile of scrap at the feet of the Omega Terminus when Sideswipe, Blurr and Rodimus eventually succeeded in tracking him to the chamber sometime later. When Rodimus proposed an alliance between the three to take control of Omega Terminus, and Cybertron by extension, Grimlock rose from his hiding place to oppose the idea, and was promptly struck by a bolt of energy from the Terminus. Bestowed with true life by the mega-computer, Grimlock shocked all present by transforming into a robot mode he was never meant to have and displaying remarkable intelligence. With a quartet of corpses reanimated by the Terminus's power backing him up, Grimlock engaged his opponents in battle, so enraged by Rodimus's interruption of his monologue that he inadvertently transformed back into his dinosaur mode. Although the unlikely team was able to take down their zombie opponents, Grimlock succeeded in knocking them all off the edge of the narrow dais upon which the Terminus rested, then shifted back to robot mode to gloat as they all clung to the edge of the platform. When Blurr began deliberately goading him, Grimlock assumed he was trying to make him angry and force a change back to his dinosaur mode. In actuality, Blurr was distracting Grimlock long enough for Sideswipe to haul himself up to safety. The reformed Autobot shoulder charged Grimlock, who toppled into the bottomless chasm above which the platform hung.

Blurr and Rodimus returned to the Autobot base to inform Optimus Prime of Grimlock's destruction... only to have the lie put into their words mere moments later, when a fully functional Grimlock came strolling into the Autobot base none the worse for wear. Prime was enraged to discover that his greatest weapon had become free-willed, but when Grimlock displayed his new robot mode and intelligence by quickly identifying a potential error in the fuel system of Prime's Ark blueprints, the Autobot leader was convinced to let him remain in one piece.

Some time later, Grimlock snuck into the corral the Decepticons had established to hold the Dinobots they had gathered up, promising to take all the Dinobots to the Omega Terminus...

When the Shattered Glass TP began, Grimlock was with the Autobots, preparing the launch the Ark. When the Ark launched, Grimlock stayed behind, helping coordinate the counterattack against the Decepticons that came to stop the launch. Grimlock is currently involved in the defense of Cybertron from hordes of invading Junkions.

Grimlock has a dark gray, turquoise, purple and orange color scheme, similar to Trypticon. He transforms into a robotic Tyrannosaurus rex. His bayonet missile launcher can be hand-held in robot mode or mounted on his dino mode's back.

As of 2016, Grimlock is played by Greengoblinsrk!