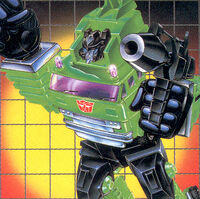 On Cybertron, Grapple's building designs are considered horrific works of art. He always had a twisted design sensibility, and the needs of war have finally given him a creative outlet for his dark visions. He takes enormous pride in what he does and strives for frightening effectiveness in all his creations.

His problem is that he cares more for the fearsome look of his defensive installations than for their structural integrity; more than once one of his constructions has collapsed in the course of battle, killing the Autobot soldiers inside. Grapple shrugs off these failures as the cost of art and war.

In vehicular mode, Grapple can lift up to 35 tons and position massive objects with uncanny precision and grace. In robot mode, he uses a high temperature arc-welder rifle that shoots a stream of concentrated infrared energy as it slices through and/or fuses its targets. He can launch explosive rockets a distance of 4.5 miles from the hand socket in each of his wrists.

Grapple's extreme artistic self-importance often results in arrogance and haughtiness, diminishing his popularity with the other Autobots. He is very adept in the use of his vehicle mode, however, whether using it to built or destroy.

Millions of years ago, Omega Doom was a member of the legendary Guardian robots, and was charged with defending Crystal City, the most spectacular city on Cybertron. He befriended the Constructicons, the city's creators. However, RECENTLY, the Constructicons were attacked by Emperor Prime's Robo-Smasher and nearly converted into Autobots (all but Grapple and Hauler managed to get away). The now-evil Grapple and Hauler convinced Omega to leave his post to help defend another city, and promised to look after the city in his stead. When he left, Emperor Prime demolished the Crystal City, while Starscream watched in horror. When Omega learned what happened, he tracked Grapple and Hauler down and tried to change the builders back into Decepticons, but the process was irreversible (Grapple was never that nice to begin with), and the treacherous former Constructicons lured Omega into an ambush by the Smasher. The Robo-Smasher attacked Omega, converting him into a truly evil, soulless monster. The rest of the Constructicons joined resistance leader Megatron, trying to undo some of the damage done to their beloved planet. Grapple had a hard time finding work before Optimus Prime's world-wide assault. Now he's pleased as punch to deliver designs for ominous towers worth of a true villain's lair.

Grapple is currently assigned to the super-secret Omega Doom project.

SG-Grapple is available for temping in the Shattered Glass TP.