View source
This article is about the Autobot architect - for his evil Shattered Glass counterpart, see Grapple (SG). 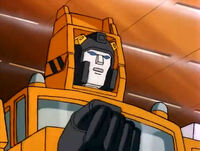 Back on Cybertron, Grapple's building designs were considered works of art. He realizes that now, in an alien environment on Earth, his ideas are limited by the necessities of war. Nevertheless, he still takes enormous pride in what he does and strives for beauty and quality in all his creations. His problem is that he cares too much; he often succumbs to severe depression should one of his constructions be destroyed in the course of battle.

In vehicular mode, Grapple can lift up to 35 tons and position massive objects with uncanny precision and grace. In robot mode, he uses a high temperature arc-welder rifle that shoots a stream of concentrated infrared energy as it slices through and/or fuses its targets. He can launch explosive rockets a distance of 4.5 miles from the hand socket in each of his wrists.

Grapple's extreme artistic sensitivity often results in moodiness and depression, diminishing his value to the other Autobots. He doesn't adapt well to his vehicle mode which often results in mechanical breakdowns.

Grapple arrived on Earth during the initial impact of the Ark into the planet. He had been present when the Ark crashed onto prehistoric Earth during the encounter wih the Nemesis, but due to being in the more heavily-damaged Ark belowdecks, he was not recovered and repaired for almost a year.

Grapple designed a Solar Tower to collect solar energy for the Autobots -- even built a little model of it. When Optimus Prime wouldn't let him build it, Grapple ran off to sulk and encountered the Constructicons, and naturally told them all about his awesome tower idea that got nixed because Prime didn't want the Decepticons getting their hands on it. Brilliant.

The Constructicons agreed to help Grapple and his buddy Hoist out, but then Megatron found out and decided to turn it into his latest evil plan. The Solar Tower was completed, but Devastator trapped Grapple and Hoist inside it, and the Autobots had to show up to save their skidplates.

Grapple was also one of several Autobots captured by Lord Chumley's wildly-improbable traps; Grapple fell victim to a series of girders that magically fell into a cage configuration. Taken to Chumley's castle, he was used as bait to draw in Optimus Prime, "forced" to hold up a giant boulder.

Grapple is available for application. He is currently temped by Bzero.