Gobotron is an alternate universe's version of Cybertron. One would be unsurprised to know that the planet is home to transforming machines who are having a civil war, but these guys are actually the cyborg GoBots, with the Guardians police force protecting from the constant Renegade insurgencies. 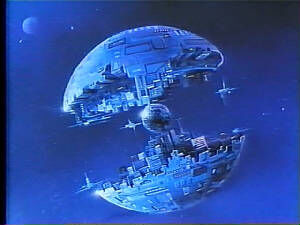 Gobotron was once the home of an advanced humanoid civilization. As their mastery of technology progressed, their world underwent significant changes. They formed a thriving society that spanned the entire planet. Eventually, they built an enormous metallic casing over its entire surface. Eventually some insurgents rebelled against the established Gobotronian order. The leader amongst these Renegades, was a terrorist known as the Master Renegade. Opposing them and defending the peaceful citizens were police officers called the Guardians. These two forces battled each other for many years. Then, one fateful day, the Master Renegade and his minions chose an asteroid harvesting fleet as their next target. During the conflict, a large asteroid was inadvertantly hurled into GoBotron's surface. The massive impact and resulting explosions killed an estimated 80% of the planet's population. It also managed to take a sizable portion of the planet with it, leaving it with its trademark apple-core shape. A scientist known as The Last Engineer, seeing the dire circumstances his people were in, developed a new technology to save those who had survived, transfering their minds into robotic bodies, thereby preserving them from extinction. Hereafter the people of this planet were known as GoBots. In the aftermath of the near total destruction of GoBotron, both the Last Engineer and the Master Renegade disappeared. The Last Engineer and the Master Renegade passed into legends.

Once, long ago, Cy-Kill was one of the greatest of the heroic Guardians. Along with his partner Leader-1, Cy-Kill was even named a High Protector of their world. Though originally content to share power with his friend, when Leader-1's fame began to eclipse his own he chaffed at the idea of being "lesser" to anyone. His boundless pride, ego and ambition to power lead him to rebel and take command of the scattered Renegade forces. If he could not rule Gobotron by popular acclaim he would take it by force!

When Mirage destroyed a nexus of the Space Bridge, a hole was ripped open into another universe. Denizens of that universe came to ours, where they remained until the rift was healed.

When Alpha Trion built the first Spanner, Optimus Prime used it to exile him to another universe, and he arrived randomly on Gobotron. Trion's sudden arrival on that world, combined with his numerous efforts to escape it, severely damaged the integrity of that universe, threatening its collapse.

When Bug Bite and Baron von Joy both realized that the resulting Cataclysm was began to threaten the very existence of their universe, the inhabitants of Gobotron ceased their conflict and held an emergency summit. It was decided to send a combined team to the 22nd Level, the dimension the originated the disaster, and try to reverse the damage. Top GoBot scientists Bug Bite, Baron von Joy, and Doctor Go were elected to travel to the other world, but Guardian commander Leader-1, more concerned for his safety than that of Gobotron, took Doctor Go's place on the mission.

Once there, many of the travellers took sides in the growing conflict on Cybertron, and remain with the Autobots and Decepticons to this day. While Bug Bite has focused on ways to save his home universe, Leader-1 has focused his ambitions on taking over the Autobots.