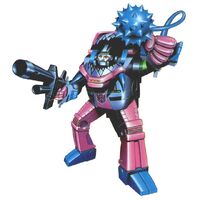 Though he originated as just another Sharkticon, Gnaw seems to be loyal only to the one who fed him last, be they Quintesson, Decepticon, or even Autobot. Much like his kin, he is insatiable in appetite and savage in combat. Gnaw's "masters" don't so much give him orders as they do unleash him like a caged tornado that promptly eats its way through the battlefield in a feeding frenzy. In water, his powerful tail fin allows him to travel at speeds over 150 knots. He is carnivorous with a voracious appetite, possessing several rows of razor-sharp teeth that can tear through solid steel. In robot mode, he carries a maceration laser that shoots salt-based corrosive liquid accelerated by a beam of coherent infrared energy. He also carries a barbed mace and a bad attitude.

Gnaw was created for the Quintesson Invasion of Earth.

Gnaw was deployed to Earth with his fellow Sharkticons on the Quintesson sharship Bellum during the Quintesson Invasion. However, Gnaw broke ties with the Quintessons and has since been somewhat adopted by the Decepticons.

For the Quintesson Invasion TP and through 2015, Gnaw was temped by Sheba. In 2016 he was played by ddlionx.

Retrieved from "https://tfumux.fandom.com/wiki/Gnaw?oldid=84916"
Community content is available under CC-BY-SA unless otherwise noted.