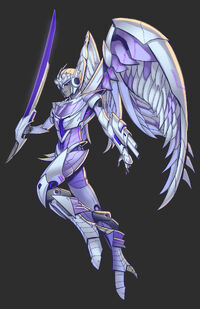 GHOST is an enigma. Her speech, mannerisms, even physical form are all subject to change. There are few files on this individual, and the ones that are present do not convey the true capabilities of this shadowdancer. She possesses a pride and bearing that show in the detail with which she focuses on her work. Underneath her quiet, studious gaze lies a seething maelstrom, a desire to prove herself to everyone. Possesses a vast array of weaponry and the ability to become a 'ghost' through means that have not been disclosed. Ghost is prone to abusing her own form for the sake of a mission, to the point of collapse. She is able to directly interface with core circuitry, downloading her persona into computer systems in order to gain access to even the most encrypted information. She often acts as a datacore herself, storing and housing the vast gigaquads of information she recovers with the same ease she shows in merging with the shadows. She is slow to anger, but when her temper does break, normally with a violent suddenness that dies down as quickly as it manifests, her skill and firepower become openly apparent.

Shadows moving against the nothingness of a void more fathomless than the outer edges of the galaxy. At least, that is at first glance. With a closer inspection, details can be made out. From the tips of wickedly upswept wings, to the ends of rounded boots, this femme seems composed of the stuff left over when the light fails. Not black, nothing so simple, more like layers upon layers of a thin deep gray, occasionally absorbing the light in inky pools, not one surface of her frame actually reflects light. Instead, she seems to absorb it, stealing its power to fuel herself. Angular, lithe, and rapier thin, her form gives the illusion of being female without the softness so common in others of her gender. A good 32 feet tall, she seems to harbor a likeness to the standard seeker models so common in the Decepticon forces, what with wings spanning out of her back, the hint of the tip of a jet forming her hips. But where they all seem from a common mold, she stands out. No obvious weapons grace her, nothing so mundane as arm rifles or shoulder rocket pods. Only the faint twinkling of emblems etched into her wings gives her allegiance, crystal embedded deep into the armoring the only thing that does reflect light off of her person, reflecting it with a shimmering violet that makes the occasional counterpoint to the vivid lavender of her optics. Finishing her appearance is a slightly crooked, somewhat arrogant smile, a sinister addition to a form that screams danger.

White as pure as untouched snow or bleached bone wraps about an angular form that stands at least 32 feet tall. With a closer inspection, details can be made out such as the gilded, sandy-gold hue highlighting the trailing edges of wickedly upswept wings and a deep, near black green thinly lined against the gold. The light seems to be pulled into the white, stare too long and the abyss may pull you in. Angular, lithe, and rapier thin, her form gives the illusion of being female without the softness so common in others of her gender. Any likeness to the standard seeker models so common in the Decepticon forces, what with wings spanning out of her back, the hint of the tip of a jet forming her torso and hips is ruined by the sheer angularness of the frame, the positioning of the intakes, the way the wings themselves seem to be formed of panels inset into panels, folded in on themselves.

Slashes of that sandy gold and deep green wrap about her vambraces in intricate spirals that end at the back of each finger, tracing twinned lines down her thighs and shins. Etched into the wing panels against the gold are words in an elder script "Ni su'cuyi, gar kyr'adyc, ni partayli, gar darasuum." is etched into the left wing. "Nu kyr'adyc, shi taab'echaaj'la" is etched into the right. No obvious weapons grace her, nothing so mundane as arm rifles or shoulder rocket pods. Only the faint twinkling of emblems etched into her wings gives her allegiance, crystal embedded deep into the armoring refracting the light off of her person, reflecting it with a shimmering violet that makes the occasional counterpoint to the vivid lavender of her optics. Finishing her appearance are slashes of that sandy gold and deep green across her face, surrounding her optics like war-paint from ages gone past.

In 2014 Metroplex was infected by the Arkvelle virus, and fell under Decepticon control. Ghost possessed his automatic systems, taking control of the entire city. For this coup, she was promoted to Decepticon Intelligence Field Commander.

Ghost is rumored to be related to Megatron in some way, but the connection has yet to have been proven.

Ghost now (2020) has multiple, personal plans running in tandem after her return to the world she refers to as 'Real-Space'.

While the player is using Mando'a in descs and IC talk, it's a placeholder as writing in old cybertronian isn't something the mux is set up to parse ;)

August 28 - Outrider's Death - Harbinger and Outrider kill each other. Harbinger eventually gets better.

November 7 - Phasing Matters - Ghosts requests a boon of Trypticon and enters into a bargain.

January 6 - Phasing Inquiry - There is an investigation into the missing equipment.

May 28 - Pumping Gas - Ghost and Optimus have a random encounter.

February 14 - "Operation Petal Drop" - It's Valentine's Day! So what's a lovelorn mech to do? Why, impress the girl of his dreams.......with flowers.

Aug 10 - Suggestion from the mainframe

Might I suggest that you do so [purge Decepticon City] in any case Trypticon? Save for your caretakers and medical for research into a cure.

(Text only, encrypted, encoded, locked and not in common Cybertronian either) Mission Accomplished, My lord. Awaiting further instructions.

After additional visitations to this neutral titan, the following has been noted

There is only danger if one enters without invitation and without escort approved by the titan herself. There are former inhabitants of the asylum under a free-range structure. The amount of neglect and damage is openly apparent in both structure and behavior. A cursory evaluation of code indicates that there is deep damage which has been attributed to willful and purposeful actions by one of the caretakers who was taken into custody with the understanding that he be tried by a neutral arbitration panel. The two caretakers were taken into custody by both cityspeakers: Windblade and Banshee. Both need to be questioned on what experiments were performed on the titan herself so that more effective means of repairs and any assistance can be performed. As it stands, outside of our own Cityspeaker, most of the relief work is coming from the Autobots while the titan remains neutral at the time of this report. An additional visitation elicited a deeper code review which matches medical records of physical damage sustained to a mechanisms master core unit and memory structure. Further review is pending a follow-up visitation. At this time it is highly suggested that there is an effort made to continually assist Calyhex through recovery. A full interrogation of the ones that did this damage is sought after but may not be possible at this time.

Trypticon has relocated himself to an orbital position over Tarn to better deploy the previously installed solar collectors for an increased self-sufficiency. Due to what appears to be a failure in a relay located externally to his systems, the early warning message was not received before the action took place. I do suggest that such relays are reviewed more often in the future as so much does relay on expedient and swift communicational capacity. An RCA is being performed internally for Trypticon himself in order to evaluate deploying a backup system for such matters instead of relying on external factors. For those assigned to the station, do pay heed to signage, there are several areas that do not have gravity engaged at this time. Entrypoints to those areas have clearly marked signage.

The laboratory facilities in Altihex were successfully breached during the diversionary assault. A cursory evaluation of what files were striped will be reviewed once access to a mainframe hardline becomes available for the cryptography requirements. There is /some/ actual data, however there appears to have been a failsafe which deleted and destroyed the data itself.

With the rampage and flurry of orders spinning about during the Altihex and Ibex maneuvers, Darkmount's systems were placed into an emergency lockdown state to prevent damage. I suspect there has been file damage based on communications by Deathsaurus but a further inquiry will require a physical passkey.

Retrieved from "https://tfumux.fandom.com/wiki/Ghost?oldid=80740"
Community content is available under CC-BY-SA unless otherwise noted.