This article is about the original commander of the Joe Team in the Shattered Glass universe. For his son, see Jimmy Flagg (SG). For the mainstream TFU version of this character, see General Flagg. 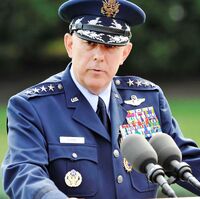 "I say we pull out and nuke the site from orbit. It's the only way to be sure."

Lawrence FLAGG is a battle-hungry, commie-hating, cigar-chomping General in strong need of a psychiatric appointment. He was one of the men most responsible for the creation of G.I. Joe under the direction of General Joseph Brady Colton, and now that Colton is President, Flagg has been awarded with his own Air Force Base, to run as he pleases. He has since taken lead in developing the Global Orbital Defense Satellite program, seeing it as his personal baby. The more power General Flagg is given, the crazier and more corrupted he becomes, and right now he has a lot of power.

General Flagg's father, Lawrence J. Flagg, Sr, was a deserter from the US Army. Using his political connections, General Flagg had his father's records expunged and his good name restored, even getting an aircraft carrier named after him.

Lawrence J. Flagg was a Brigadier General in the US Air Force. He was responsible for supporting Special Counter-Terrorist Group Delta, code named G.I. Joe, in response to rising terrorist threats, especially the supposedly evil Cobra Organization. He was the first commander of the G.I. Joe Team, but often spent time in an administrative role.

Flagg is currently in charge of the Burpleson Air Force Base. After a successful test of the Global Orbital Defense Satellite, Flagg is itching for a new target and a chance to fire it again.

Flagg is overjoyed at the capture of the elseworld Transformer Snoop, who is being held in the Burpleson Air Force Base. While on a ecent trip to Virginia, Flagg encountered the TFUniverse version of Major Bludd, who offered to help Flagg locate Sebastian and Scott Bludd for a fee. Flagg eagerly agreed.

On his way back to base, Flagg encountered the Duchess and attempted to capture her. However, the Duchess was able to disarm Flagg and get to her own weapon, at which point Flagg fled the scene.

When Chip Chase threatened the Joes' mainframes if they did not hand Buster Witwicky over to them for torture, Flagg offered Witwicky to be captured and handed over as ransom, but Chase to be killed once the servers were secure. Ebony and Mainframe succeeded in that mission.