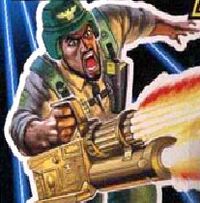 "It doesn’t matter what I look like. I clean up other people’s messes."

Proper dress and discipline have never mattered to General COURAGE – all he cares about is getting the job done, preferably with no witnesses. He works hard to impress his superiors and insists that anyone under his command will quickly be transformed into lean, mean, secret killing machines. He’s sometimes nicknamed “Mr Clean” not only to mock his slovenly appearance, but because of his ability to make uncomfortable rivals and scandals disappear. Because of his lazy work ethic and the favors and power he’s collected over the years, he usually makes sure he’s assigned to intelligence tasks behind the lines and behind a desk – far from actual danger (“General Courage” is also a mocking nickname). He avoids combat duty like the plague, and hasn’t had a mission in the field in years. He is very good at delegating unpleasant tasks, but those around him fear he may be losing his touch as he ascends through the ranks and has less and less hands-on experience.

The door to this office has a brass plaque with the name "General Cliff 'Courage' Mewett" engraved into it. The plaque looks slightly crooked.

Inside, General Courage has managed to clutter up his office with impressive piles of take-out wrappers and empty beverage containers.

His desk is a mass of unorganized paperwork, with stacks and stacks of unread reports, some months old. The entire room reeks of burnt coffee, acrid smoke and sweaty socks. An overflowing ashtray on the desk is full of cigarette butts, and usually has at least one still smoldering, even when Courage is out.

Behind the desk on the wall is a large flag. It is the traditional American stars-and-stripes, still hanging from when this was Flint's office. Over the file cabinet is a framed picture of President Colton, also still here from Flint's tenure as Pit commander.

Courage rose through the ranks through clever politicking and the ability to make certain unpleasant difficulties disappear for his superior officers.

When General Flint was killed, Courage was promoted and put in charge of the Pit and G.I. Joe Army operations.

General Courage is one of the highest ranking Joe officers, and often takes charge when Generals Flagg or Ho aren't available.

General Courage is available for temping.

Retrieved from "https://tfumux.fandom.com/wiki/General_Courage_(SG)?oldid=31410"
Community content is available under CC-BY-SA unless otherwise noted.