This page is for the evil hunter/destroyer Geist. For the subversive agent, see Omen. 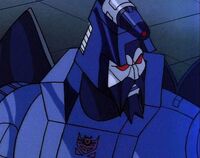 Somber and quiet, GEIST becomes a completely different mech when engaged in the hunt. He relishes the feeling gained by terrorizing his prey to extremes. He is Able to cloak his presence via holographic masking, allowing for the ultimate in horrifying surprises. His tendency to focus on fear, however, can distract him from larger goals.

Geist was created from the wreckage of an unfortunate Decepticon long-range patrol that ran afoul of Unicron. Sent to Earth, Geist was originally subservient to the Chaos God, but since Unicron's destruction Geist is a free agent. He has chosen to throw his lot in with the Decepticons, gleefully hunting down insurgents on the planet Cybertron.

Geist serves Scourge on Cybertron and Earth. In 2013 he was involved in the search for the Cult of Galvatron.

Megatron destroyed the cultists on Earth, but more lurked on Cybertron, many freed by Windshear. The rest of the cult was ultimately destroyed, and Geist was assigned to investigate a new cult rising in Silent Grill.

Geist is available for application. Until then he is @emitted by Scourge's player.