This page is for the Evil Shattered Glass Autobot Mini-Bot. For his heroic main universe counterpart, see Gears. For the G.I. Joe character, see Capt. Gears. 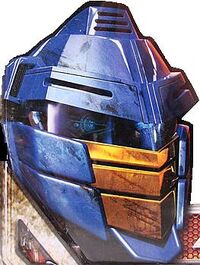 GEARS loves Earth, a lush, green planet practically asking to be taken over by the Autobots. He seems to have a positive attitude about everything, and never a complaint in the world. Like his comrade Huffer, Gears has a desire to lure his fellow Autobots into a fall sense of security, and then stab them in the back. Gears and Huffer actually make a good team, although neither trusts the other farther than they could throw the Ark.

Gears is strong and tough, not so much in lifting but in endurance, and carrying heavy loads with little effort, be they energon cubes, disabled Autobots, or captives for the smelting pool. He is fitted with infrared vision sensors in both modes.

In Ford F-150 mode, Gears can transport heavy loads long distances. In robot mode, Gears can release controlled bursts of compressed air from his feet, launching himself to altitudes over 100,000 feet, and floating back down. In doing so, he must be careful not to lose air pressure before coming close enough to the ground for a safe landing. However, if he's spotted while floating, he is a difficult target due to his increased maneuverability in the air.

Gears is often given advice and support by the Autobot Stormfront. Gears was present at the battle between Jetfire and Jazz.

When the Autobots took over the Decepticon Shuttle Seizer in 2016, Gears took the controls after Long Haul was killed.

Gears is available for temping. In the meantime he's @emitted by BZero.