This page is for the Autobot Mini-Bot. For the G.I. Joe character, see Capt. Gears. 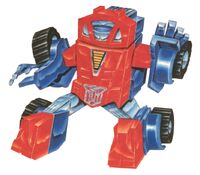 Gears hates Earth, a lush, green planet practically as unlike his cozy, gray, metallic homeworld as possible. He grumbles and complains about being shipwrecked on it -- complains and grumbles to a ridiculous extent, until he becomes a source of amusement, rather than negativity. This is usually his intent -- unlike his fellow Mini-Bot Huffer, Gears has a desire to help his fellow Autobots see good in a bad situation. Still, he does get depressed from time to time.

Gears is strong and tough, not so much in lifting but in endurance, and carrying heavy loads with little effort, be they energon cubes, disabled Autobots, or potatoes for the farmers' market. He is fitted with infrared vision sensors in both modes.

In robot mode, Gears can release controlled bursts of compressed air from his feet, launching himself to altitudes over 100,000 feet, and floating back down. In doing so, he must be careful not to lose air pressure before coming close enough to the ground for a safe landing. Also, if he's spotted while floating he is an easy target due to his limited maneuverability in the air.

Gears was one of the original crew of Autobots on the Ark spaceship when it crash-landed on Earth millions of years ago. When he awoke in 1984, he was reformatted by Teletraan I so that his alt-mode was an Earth-based pickup truck. Not a combatant, he didn't participate in too many of the Autobots' most famous battles against the Decepticons, but he did his part despite his complaints. Gears' infrared sensors were useful in capturing Ravage when the Decepticon was caught trespassing at the Autobot headquarters.

Megatron stole a chip from Gears to complete his Solar Needle, a weapon that will pierce the sun itself. The removal of the chip altered Gears' personality from cranky to jovial. Nobody wanted to fix him, but, sadly, if they didn't the Solar Needle would destroy the sun. Tough choices.

Gears is often the brunt of pranks played by the Autobot Dust Devil.

He was part of the crew on the ill-fated maiden voyage of the Spirit of Freedom.

< A typewritten report from Gears > It appears that a certain member of our ranks, one Cavalier with a flame paint job, managed to get himself dissected and buried under some rubble in the Tagan Heights. I only became aware of his absence when a transport op he had been assigned to guard came up and his location was unknown. With the help of Nightstalker in Intelligence, we were able to narrow down his last known location. Nightstalk, Starlock and I went out to locate him and bring him back to Iacon. We found him buried under some rubble but it's clear from the way the support beam was found that this was not an accidental collapse. After searching and digging through rubble, we uncovered Hot Rod and his missing parts. Starlock performed an emergency energon transfusion and then loaded him into the bed of my altmode where I carefully drove his damaged form back to Iacon. He is currently in medical bay undergoing repairs. < report ends >

In the Decepticon World universe, Gears was one of the Autobots killed in the Ark Massacre.

Gears is available for application. He was temped by Bzero in 2013. Now he's temped by Bloody Bones.