Start a Wiki
This article is about the former herald of Unicron - for the clone built by Nemesis, see Galvatron clone. 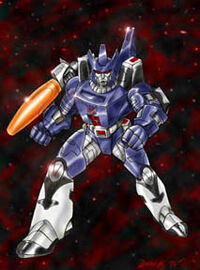 Galvatron was the new name and identity for a Megatron from the future whose remains were metamorphosized by Unicron. Galvatron was Megatron to the ultimate degree -- more evil, more powerful, and even less subject to emotion or decency. Through the powers of Unicron, Galvatron's own powers were augmented continuously so that his strength became so vast that his arrogance and confidence were boundless. As long as Unicron existed, Galvatron was invincible, but Galvatron's conceit and greed for dominance are so great Galvatron plotted against even Unicron, and hoped to retain his new might without him. In robot mode, he possessed enough strength to pulverize an Autobot into scrap metal, and carried his legendary translucent cannon as well as a laser rifle that emitted chemically-produced, direct-current electricity. Galvatron's powerbase may have been weakened with the destruction of Unicron, but he remained a powerful, deadly foe. Ultimately, however, it was not enough, and he was killed by this universe's counterpart.

Galvatron was brought by Unicron from an alternate future to act as his herald.

Galvatron was killed by Megatron.

When Galvatron was killed by Megatron, Nemesis kept the body.

When Megatron disappeared for several months in 2012, Nemesis began construction of a Galvatron clone to inhabit in case he needed to take over the Decepticons. However, Megatron's return in 2013 made this contingency plan unnecessary.

In 2014, Galvatron seemed to return, ambushing Megatron and killing him in front of several of his Decepticon officers. Galvatron then set himself up in Polyhex, naming himself new Decepticon leader. After destroying two cities, this Galvatron was killed by a resurrected Megatron, and the cult that had formed around him wiped out by a team of Decepticons.

Galvatron's song to Cyclonus: "Please Don't Leave Me," by Pink

As a TP Character, Galvatron was played by a member of TPStaff.

Retrieved from "https://tfumux.fandom.com/wiki/Galvatron?oldid=79427"
Community content is available under CC-BY-SA unless otherwise noted.