View source
watch 01:54
Obi-Wan Finale - The Loop
Do you like this video?
Play Sound
The name or term Blackrock refers to more than one character or idea. For a list of other meanings, see Blackrock (disambiguation). 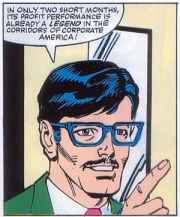 G.B. Blackrock is the multi-millionaire industrialist behind Blackrock Industries, a huge megacorporation with numerous subsidiaries. He is a wiz at finance, and is used to getting his way whatever he sets out to do. He has been known to wring success out of even the most dismal-looking endeavors. He enjoys being one of the most powerful men on Earth, and is generous and kind to his underlings as long as they produce. He hires only the best, and expects them to work as hard as he does. He owns a small fleet of private jets, and buys and sells companies as routinely as most Americans buy soft drinks. The destruction of several of his key installations by the Decepticons, and the injury of his top engineer Josie Beller, have created a hatred of the Decepticons in G.B. Blackrock -- one for which he is willing to use his vast resources to gain revenge.

The Blackrock family was called Schwartz when they came to the US. Once they got into the fossil fuel business (starting as coal miners, and slowly working their way up), they chanced their name to Blackrock to avoid anti-Semitic prejudice.

Blackrock was one of the first humans to feel the presence of the newly-arrived Shockwave, who attacked a highly efficient oil-drilling platform developed by Blackrock Industries and designed by Blackrock employee Josie Beller. The attack left Beller paralysed, and Blackrock blamed himself for the incident. The invasion of Blackrock's aerospace plant soon afterward caused Blackrock to believe that he had been specifically singled out by the giant robots, which he did not yet recognize as aliens from another world. Blackrock eventually leaned the truth about Transformers, and with Josie Beller is looking for alternatives to get them off his lawn planet.

In the late '80s and early '90s, Blackrock continued to build his empire, branching out into IT, construction, and renewable energy. In 1993, Blackrock Construction hired Spike Witwicky, partially with the hope that Spike would begin to unveil what he knew about the Autobots. Much to Blackrock's disappointment, Spike was mum, wishing only to be judged by his work. Spike quickly rose up in rank at Blackrock, and within three months of employment, was given the title of foreman, one of the youngest in Blackrock Industries to achieve the title. He was assigned as one of four chief foremen in overseeing the counstruction of Blackrock Tower, an 84-story office and retail complex. Under Spike's brief stint are foreman, he took a project that was six weeks behind schedule, and put the project almost six weeks ahead of schedule. His goal of reaching eight weeks ahead of schedule was cut short after he was attacked and almost fatally wounded by Frenzy. Not satisfied with almost killing the Autobot ally, Frenzy also destroyed the building.

Strangely enough, Blackrock never fired Spike for this incident (he fired far more people for far less). Already losing a building, Blackrock's PR team convinced G.B. that firing a mere foreman would be a moot point, Instead, they convinced Blackrock to keep Spike on their payroll, which would put G.B. closer with the Autobots - and to earn some PR points by publicly committing to see to it that Spike makes a full recovery, and his family would be provided for during his rehab.

The gamble paid off. Not including the tens of millions Blackrock received in insurance settlement claims (though his premiums took a significant upswing), Hoist and Grapple volunteered their services to reconstruct Blackrock's high-rise building, which enabled Blackrock to not only strengthen his ties with the Autobots, but take advantage of the best engineering team not only on Earth, but the entire galaxy (with the exception of the Constructicons).

In 2012, PetroChina surpassed Blackrock Industries as the largest oil producer in the world.

In 2013 he recruited Carly Witwicky to work for Blackrock Industries.

In December of 2016 President-Elect John MacLeod named G.B. Blackrock as his pick for Secretary of State.

In a world dominated by Decepticons, G.B. Blackrock supports one of the few humans who dare stand up to the alien oppressors: Circuit Smasher.

Witwicky What If? Universe

In the Witwicky What If? Universe, Carly is chief research scientist for Blackrock Industries, and Mr. G. B. Blackrock and she are married.

G.B. Blackrock is often temped by Bzero, but is available for application.