This is a page for the G.I. Joe faction. For the man who founded the group, see G.I. Joe (Colton).

G.I. Joe is the official code name for Special Counter-Terrorist Unit Delta, devoted to protecting the world from Cobra and other violent terrorist organizations. They are highly skilled, and have access to cutting-edge military technology. Led by General Hawk and Flint, G.I. Joe are true American heroes! Based in their hidden base in an undisclosed location somewhere in Utah, G.I. Joe is the world's best defense against the assaults of Cobra, and assist against the ravages of the Decepticons as well.

The Pentagon tightly controls information about GI Joe and refuses to comment publicly on the highly secretive unit and its activities. Delta operators are granted an enormous amount of flexibility and autonomy. To conceal their identities, they rarely wear a uniform and usually wear civilian clothing both on and off duty.[1] When military uniforms are worn, they lack markings, surnames, or branch names.[2] Civilian hair styles and facial hair are allowed to enable the members to blend in and avoid recognition as military personnel.[3][4]

This Medical Report is on the following personnel: Scarlett and Coldshot

Coldshot: She has suffered massive internal injuries. Crush wounds from an unknown source. She is currently Comatose. Prognosis: Undetermined time in Medical, at least a month, more likely 2, recovering. After that, likely will need another month to regain strength.

A large amount of GI Joe vehicles in the PIT have had magnetic signs applied to their sides, changing GI JOE to GI JOESE, REAL MEXICAN HERO.

Someone has too much time and is in too high a pay grade. 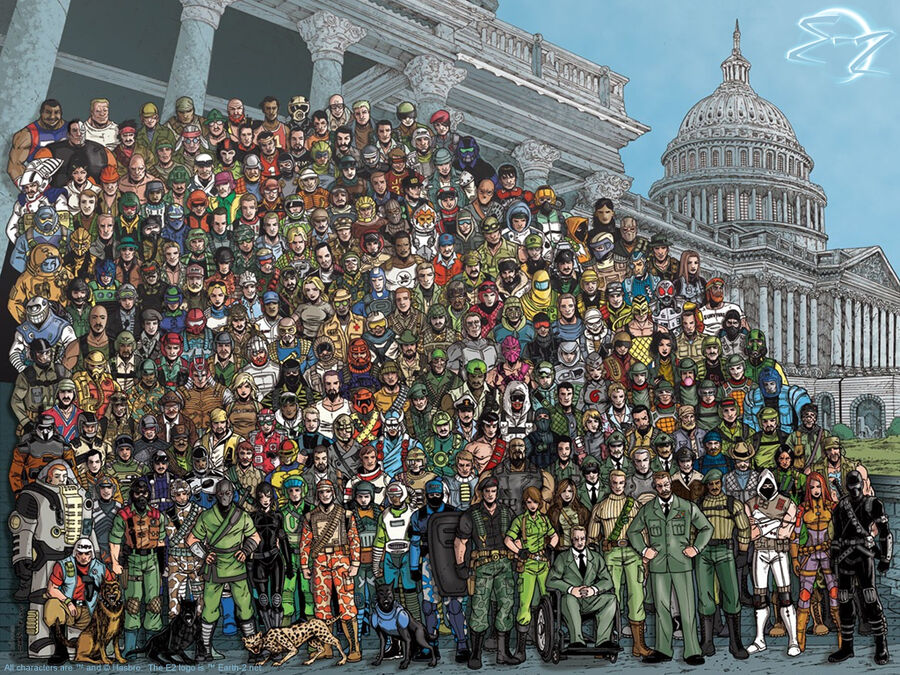 After the conclusion of the Second World War, General Robert Savage speaks to the newly formed United Nations, and stresses the importance of not only a world diplomatic force, but a policing force. The General is placed in command of the UN's security forces, which are named G.I. Joes by the people. Joe takeover was gradual, with them slowly gathering up power. Temporary emergency powers somehow become permanent, and keep growing. Under the Joes, peace is maintained and strengthened, and even though there are still seeds of discontent, the Joes faithfully and honorably defend the principles of peace and justice.

In the Shattered Glass universe, G.I. Joe is an assassination squad serving the personal interested of President Colton. Any one stirring up too much trouble, or suspected of 'terrorist' or 'un-American' leanings, is rounded up and "detained," usually never seen again -- "rendered" to another country for torture, or just buried in the desert with a bullet in their head. General Courage runs the day-to-day operations of G.I. Joe, with the assistance of G.I. Joe Command.

In recent years G.I. Joe has gotten bolder, taking out dissidents and 'troublemakers' at home and abroad with ruthless precision. Their primary target, Cobra, has been forced to ground, and are slowly being hunted, one by one.