View source
watch 01:25
Jurassic World: Dominion Dominates Fandom Wikis - The Loop
Do you like this video?
Play Sound
This article is about Doctor Fujiyama the Famous Scientist - for his robotics company, see Fujiyama Robotics. 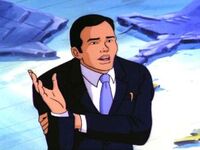 Dr. Fujiyama Akira is a famed robot designer - one of the best in Japan. He is a master of robot design and construction, but bad at recognizing the possibility of unintended consequences and potential misuse of his creations. His most famous example is Nightbird, a giant robot ninja he constructed that was subsequently stolen and reprogrammed by the Decepticons.

Doctor Fujiyama Akira, who reportedly is a man of some renown in the scientific world, built a ninja robot. Her name was Nightbird, and her purpose was to benefit mankind. However, the Decepticons stole her and reprogrammed her to be evil, so he locked her away for humanity's protection.

Nightbird was later stolen again by the Decepticons, and remains a tool in their arsenal. Dr. Fujiyama continues to build giant ninja robots, still yet to figure out the concept of unintended consequences.

In 2011, Dr. Fujiyama was hired to build robots to help safely decontaminate the Fukushima Daini Nuclear Power Plant‎‎ after the 2011 Tōhoku earthquake and tsunami. Unfortunately, during a Decepticon raid on the power plant in 2013, most of Fujiyama's robots were captured or destroyed by Scrapper.

In 2014, Dr. Fujiyama took his team of robot ninja to Canada to help with partial meltdown cleanup of the Bruce Nuclear Generating Station.

Dr. Fujiyama is the creator of Nightbird. On the MUX, his given name is Akira.

Dr. Fujiyama has been played on the MUX by Drake Fenwick. However, he is now available for application, and in the meantime is temped by Bzero.