Transformers Universe MUX
Register
Don't have an account?
Sign In
Advertisement
in: Pages with script errors, US Army, Article stubs,
and 8 more 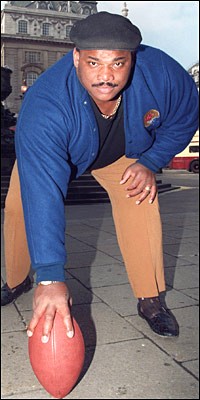 William Anthony Perry (born December 16, 1962) is a former American college and professional football player who was a defensive lineman in the National Football League (NFL) for ten seasons during the 1980s and 1990s. Perry played college football for Clemson University, and was recognized as an All-American. He was selected in the first round of the 1985 NFL Draft, and played professionally for the Chicago Bears and Philadelphia Eagles of the NFL. In reference to his large size, he was popularly known as "The Refrigerator" or, abbreviated, "The Fridge".

Perry was born in Aiken, South Carolina. He has stated in an interview that "Even when I was little, I was big"; by the time he was 11 years old, he weighed 200 pounds.[1]

Frequently ridiculed for his weight while growing up, Perry took advantage of his athleticism to silence his critics. He attended South Aiken High School and played as a 295-pound nose guard on the school's football team. During an exercise in which his coach instructed all of his fastest players to line up for a 100-yard dash, Perry joined the group of running backs, wide receivers and defensive backs and eventually was timed as the 6th fastest runner on the entire team.[1] He could also execute 360-degree dunks on regulation basketball hoops and perform complicated dives into the swimming pool.[1]

Perry's athletic performances earned him a full-ride scholarship to attended Clemson University in Clemson, South Carolina, where he played for coach Danny Ford's Clemson Tigers football team from 1981 to 1984. He won a national championship in 1981, and was recognized as a consensus first-team All-American as a junior in 1983. As a freshman in 1981, he earned his "refrigerator" nickname when a fellow player could barely squeeze into an elevator with Perry and their laundry which they were taking to be washed. The player, Ray Brown, said "Man, you're about as big as a refrigerator.[1]

In 1985, he was selected in the first round of the 1985 NFL Draft by the Chicago Bears; he had been hand-picked by coach Mike Ditka[1], however defensive coordinator Buddy Ryan, who had a highly acrimonious relationship with Ditka, referred to Perry as a "wasted draft-pick".[1] Perry soon became a pawn in the political power struggle between Ditka and Ryan.[1]

Perry's "Refrigerator" nickname followed him into the NFL and he quickly became a favorite of the Chicago Bears fans. While Ryan refused to play Perry, Ditka decided to use used Perry as a fullback when the team was near the opponents' goal line or in 4th and short situations, either as a ball carrier or a lead blocker for star running back Walter Payton. Ditka stated the inspiration for using Perry as a fullback came to him during five-yard sprint exercises.[1] During his rookie season, Perry rushed for 2 touchdowns and caught a pass for one. Perry was once used in a surprise play during a Pro Bowl game as an offensive lineman. Perry even had the opportunity to run the ball during Super Bowl XX, as a nod to his popularity and contributions to the team's success. The first time he got the ball, he was tackled for a one-yard loss while attempting to throw his first NFL pass on a halfback option play. The second time he got the ball, he scored a touchdown. About halfway through his rookie season, Ryan finally began to play Perry, who soon proved that he was a capable defensive lineman.

He was tapped as a physical trainer for the Joes in 1986, the same year the Bears defeated the New England Patriots in the Super Bowl.

His Super Bowl ring size is the largest of any professional football player in the history of the event. His ring size is 25, while the ring size for the average adult male is between 10 and 12.[2]

Perry went on to play for ten years in the NFL, retiring after the 1994 season. In his 10 years as a pro, he regularly struggled with his weight, which hampered his performance at times. He played in 138 games, recording 29.5 sacks and 5 fumblerecoveries, which he returned for a total of 71 yards. In his offensive career he ran 5 yards for 2 TDs. Perry later attempted a comeback, playing an unremarkable 1996 season with the London Monarchs of the World League of American Football (later NFL Europa).

After retiring from football, Perry was involved in a few other entertainment endeavors, including the following:

After he retired as a player, Perry founded his own small commodity hedge fund in his native South Carolina and made numerous public appearances.

Recently, he was named Director of Football Operations for the Continental Indoor Football League's Chicago Slaughter.

In June 2008, he was diagnosed with Guillain–Barré syndrome, a chronic inflammation disorder of the peripheral nerves.[6] On April 22, 2009, Perry was hospitalized in South Carolina in serious condition from his Guillain-Barré syndrome.[7] Perry spent approximately a month in the hospital before being released. At one point his weight fell to Template:Convert, before going back up to Template:Convert.Template:Citation needed

During Super Bowl XLIV, Perry joined other members of the 1985 Chicago Bears in resurrecting the Super Bowl Shuffle in a Boost Mobile commercial.[8]

In June 2010, it was reported that Perry now suffered from hearing loss, but also that he was improving after his diagnosis of Guillain-Barré syndrome. He had lost more than one hundred pounds (Template:Convert), but was, by this time, back up to Template:Convert.[9]

In February 2011, ESPN ran a somber article about him, citing ongoing health and drinking problems, and a weight of Template:Convert.[10]

In April 2011, Cliff Forrest, a 10 year-old child, discovered Perry's Super Bowl ring for sale. With help from his mother, he purchased it for $8,500 and returned the ring to Perry.[11]

After his NFL career, The Fridge also does paid corporate appearances and autograph signings. His official website is www.Fridge72.com.[12]

Fridge remains a reserve member of G.I. Joe, available if [upon].

One of two Joes based on Real Life People. The other is Sergeant Slaughter. There was another Joe, based on Rocky Balboa, but Rocky was totally Fictonal, while Slaughter was at least based on the Wrestler Sgt. Slaughter, even if it was only a stage name/persona.