This page is for the evil Decepticon warrior. For his less-evil Shattered Glass counterpart, see Frenzy (SG). 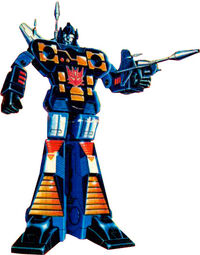 "Sow panic and surrender will bloom."

If FRENZY needed to breathe, war would be his oxygen. He knows no cause, only craves to spread fear and destruction. His efforts are appreciated by other Decepticons. His devotion to warfare makes him hard to deal with on a personal level. He can roll his drums to produce high-pitch, grating sound of 200db. This disorients and disrupts electrical flow in opponent's circuitry which makes them malfunction. However, he is physically weak, and his manic attack can be countered with cool logic.

Millions of years ago, Frenzy and Rumble were working together as "industrial equipment" built by Soundwave for Mining Outpost C-12, harvesting energon veins for Cybertron. When their employment was terminated by the Senate in favor of automation, a riot broke out among the miners, and they were taken into custody. With the aid of their fellow miner Megatron, however, Frenzy and Rumble hijacked the shuttle transporting them to prison, and the trio fled into the bowels of Kaon, where they eventually helped form the Decepticons.

Since the MUX is based on cartoon canon, Frenzy's player is welcome to portray him as red-and-black if that is the individual player's preference.

Frenzy was one of several Decepticons who attacked the crippled Ark spaceship before it was able to leave Cybertron's orbit. With nearly all the Autobots on board wiped out, Frenzy enjoyed several million years of the spoils of war. In 1986, he was assigned to help his fellow mini-con Rumble in establishing Decepticon rule on planet Earth. Though he hated the job, the planet, and its inhabitants, he enjoyed the murderous mayhem he was able to level on the planet. However, his out-of-control nature came to an abrupt end when he was injured, thanks to G.B. Blackrock's underground army of resistance fighters. Shortly after he was injured, he was publicly executed by Circuit Smasher in retaliation for the apparent death of Sparkplug.

Frenzy's actions in Spike's MUX history were decided by Spike's player. Frenzy himself had a player until 2002, but is now available for application. In the meantime he is temped by Bzero.