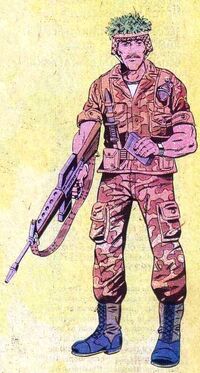 The origins of many Cobra operatives are easily bizarre enough but to have that same strangeness exist in a member of the Joe Team? FOOTLOOSE had it all. Highly intelligent valedictorian in high school, track team captain, gone to university on a state scholarship, an upbeat life anyone can be envious of. For some inexplicable reason, the man just went off the public radar, leaving his past and achievements. The people who last saw him then described him that he has started acting weird. And just like that, he was gone for three years before he resurfaced as a soldier in the Army. His behavior still puts off a lot of people. It's as if he is continually pondering his direction and thinking something is bigger out there. As nutty as he may seem, it should be of some comfort that he is a reliable man in combat and one of the best out there in the field.

FOOTLOOSE makes himself feel right at home in any environment. However, he enjoys the challenges of trekking through jungle locales the best. If you ask him, he'll tell you something about feeling a connection with everything from the dangerous wildlife all the way down to the pesky mosquitoes. On the flip side, he's the one carrying the latest assault rifle and portable rocket launcher to handle any situation that goes bad. His teammates respect him, although they still think he acts a little weird sometimes.

Growing up, Footloose excelled at whatever he did. He was his senior class valedictorian, captain of the track team and an Eagle Scout. But while studying for his degree in Physical Education, Footloose dropped out of school and became quite weird for about three years, heading off to Venice, California to "find himself". It suddenly came to him one day that his life had no meaning and promptly joined the Army. After basic training and AIT at Fort Benning, he attended jump school and the desert training unit. He eventually joined the G.I. Joe team as an infantry trooper.

Upon his arrival on the Joe team, he found himself nervous and on edge due to being quickly thrust into duty, battling Cobra's new Crimson Guard at the Arbco Brothers Circus where the elite Cobras were secretly stationed. A short time later, he and several other Joes stormed a house on Staten Island where an undercover Cobra agent had been living. The discoveries after the raid led the Joes to the Gulf of Mexico and the newly created Cobra Island.

Footloose quickly settled into life on the Joe team and participated in many missions, including an undercover mission in Afghanistan to recover a top secret laser cannon from the Oktober Guard, and a near-disastrous mission to capture a Soviet scientist in Southeast Asia. Later, Footloose served as part of the security detail at the Joes' secret facility at the Presidio in San Francisco. In 1989, he joined Slaughter's Marauders.

But can he dance like Kevin Bacon? That's the real question, isn't it?

Footloose is available for application.

Everybody cut, everybody cut, Footloose! This is how he spent his vacations, and he can dance like Kevin Bacon did in the Movie too!