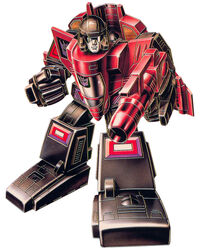 Flywheels has a split personality -- he fights himself more often than his foes. Each half of him is jealous of the other. He is often heard arguing with himself, even when unified in robot mode. In robot mode, he carries a laser cannon with infra-red sensors for heat-seeking capabilities. His self-propelled howitzer tank form has maximum speed of 75mph, with a range of 350 miles. His F-4 Phantom II fighter jet mode has a maximum speed of 1300mph, with a range 1800 miles. His vehicle modes are individually powerful, but his inability to work well with himself hampers his overall effectiveness.

Megacycles ago, Shockwave selected two decepticons to take part in his experiments with enhancing the cybertronian body and spark. Flywheels and Battletrap were selected for this because to most, they were your standard decepticon troopers, AKA expendable. Shockwave's experiment was successful, he was able to split each of their sparks into new vehicle forms and merge them when they transformed. However, this resulted in psychological instabilities. For example, in Flywheels' case it cause him to have multiple personalities that argued for control with each other.

While the Earth-based Decepticons slumbered, Venom's Mayhem Attack Squad was active on Cybertron, as an independent force that performed missions for Shockwave on an individual basis, counterpart to the Autobot Wreckers.

Flywheels remains a member of the Mayhem Attack Squad on Cybertron, except when he is needed on Earth.