View source
The name or term Faireborn refers to more than one character or idea. For a list of other meanings, see Faireborn (disambiguation). 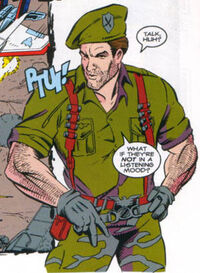 FLINT was a Rhodes Scholar and earned his degree in English Lit. Bored by the Groves of Academe, he enlisted in the Army and applied the tenacity and concentration he had used so well scholastically to grind his way through Airborne School, Ranger School, Special Forces School and finally Flight Warrant Officers School.... graduating each with top honors. A thorough tactical planner, Flint drafted and personally led a half dozen rescue missions in hostile territories that for obvious reasons of security were never publicized, let alone admitted to. Flint now leads the G.I. Joe team, quietly taking out any threat identified by President Colton.

Flint had a problem with arrogance, for his self confidence often bordered on being downright cocky. His teammates usually tolerated him because they knew he had the goods to back up his attitude, but his ego sometimes got in the way of his relationship with Lady Jaye, who was initially turned off by his cockiness when he came on to her. Still, Flint was a brave, steadfast soldier who refused to be intimidated by anyone or anything.

Flint made his debut as backup for a small group of G.I. Joe soldiers who found COBRA at a local fair. Flint ended up fighting Xamot and Tomax onto the top of a roller coaster loop. He was only actually punching one of them but due to their telepathic connections, the other one felt every blow. The two COBRA sympathizers eventually escaped.

Flint later proved to Lady Jaye he was a complete jerk when he ATTACKED a group of COBRA EELs by himself. This provided Lady Jaye with the opportunity to warn the other Joes of the COBRA swimmers. Since the Eels weren't armed, Flint was never in any real danger. While he gloated about the beating he gave out, he put the moves on Lady Jaye, who was turned on by his violent outburst. She forgave Flint's constant arrogance and gave in to their mutual lust for violence.

Flint loves his more brutal side, as shown in a mission in war-torn Wolkekuck-Uckland. He and Lady Jaye stumbled upon two COBRA peace activists. Flint gleefully killed his unarmed opponent. The other man surrendered to Lady Jaye. Flint said they cannot take prisoners, and offered to kill the man if she is not able to do it. Together, Flint and Lady Jaye tortured the peacenik for his knowledge of COBRA's movements, and then they killed him together, brutally mutilating both bodies as a warning to others.

Flint married Lady Jaye, and they had a daughter Marissa. Flint was named Commander of G.I. Joe operations, personally leading hit squads against anyone President Colton deemed a threat. He and Lady Jaye were estranged, and he found his release with Cover Girl and bouts of brutish violence.

When the TP begins, Flint and his Joes had been sent to follow up on rumors of alien robots hidden as Earth vehicles and equipment. If found, they were to be captured and dismantled for military research.

On April 19, 2010, General Flint realized that the woman posing as Ebony in the Pit was actually Scarlett from the TFUniverse. Confronting her, Flint nearly defeated her in one-on-one combat, but was ultimately defeated. The real Ebony showed up and disabled the injured Scarlett as she tried to escape. After contemplating Flint's dying form for a moment, she decided to finish him off with two bullets to the head. General Ho has since taken over G.I. Joe's day-to-day operations.

General Flint was a TP character, and temped by Bzero, until he was killed by Ebony.