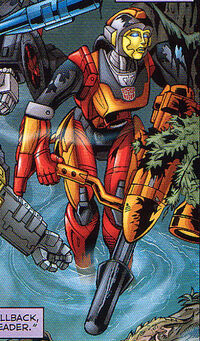 FLAREUP loves her job, and does it with a cheerfulness and zeal matched by few of her Autobot comrades. Unfortunately, her job is to blow things up, and thus her disposition is often considered by her comrades to be a little off-putting. More seriously, she tends to enjoy herself so much that she gets careless, and more than once, her colleague Chromia has had to pull her, quite literally, out of the fire.

Flareup was once a student of rescue operations officer Firestar. She learned the art of rescue well, but soon developed a fondness for destruction rarely seen among Autobots. However, her love of destruction is not a love of violence. It is more an appreciation of the planning behind demolitions as if it were an art form. Her extreme cheerfulness unnerves other Autobots as it seems to run contrary to the grim nature of her work.

In vehicle mode, Flareup is capable at traveling at 330 mph. She maneuvers readily and can utilize both her missile launcher and laser canon in this form. These two weapons combine to form a powerful weapon in robot mode. Her skin is made of special composite that allows her to withstand temperatures of up to 8,000 degrees centigrade. She is an expert at the use of "smart" explosive charges to destroy a target.

Flareup sometimes gets too wrapped up in the planning of her demolitions and does not take proper precautions to protect herself from the results of her handiwork, leading to injury.

Flareup was once a student of rescue operations officer Firestar. She learned the art of rescue well, but soon developed a fondness for destruction rarely seen among Autobots.

In 2019, Flareup was assigned to Moonbase Four, where she witnessed the Fallen pursuing Bulwark, and helped defend the base from an attack by Deathsaurus's Warworld.

Flareup is available for application. In the meantime she is temped by BZero.