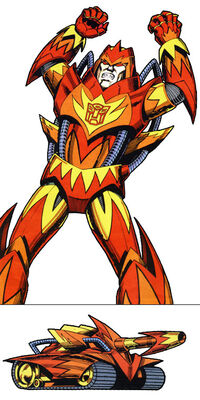 "I was cast out of the Academy and denied funds to continue my experiments! It didn’t stop me!"

An outcast from the Autobot scientific community, FLAME's passion for science burns as brightly as the fire that he spews from the cannon of his altmode. Having devoted himself entirely to intellectual pursuits, he has an undeniably brilliant mind with a knack for unconventional thinking. While this would be an admirable trait in many other scientists, Flame's obsession with knowledge has caused him to cast aside his scruples, making him unpopular among his peers. Although he is a genius mechanical engineer and a crack medic, his carelessness can sometimes make him as much of a threat to his allies as to his enemies. Flame's altmode is a tank of unusual design, featuring a flame cannon in place of the normal turret. The fires this cannon produces can exceed 3000 degrees celsius in a focused, mid-range stream, or a short-range wide-angle fan. This makes it a very dangerous weapon, fitting Flame's general attitude.

Flame was a member of the Iacon Academy of Science and Technology, where he studied diligently in fields relating to mechanical and medical engineering, hoping to discover ways to improve life for the average Transformer. When the war began, he joined the Autobots to apply his knowledge toward helping those wounded in battle, even taking up a combat altmode himself in an attempt to more directly reduce casualties by simply eliminating the opposition before they could harm his allies.

However, after witnessing one too many deaths on the battlefield, Flame got the idea in his head of trying to resurrect the fallen soldiers. His peers in the scientific community tried to dissuade him from his foolhardy quest to play Primus, but the more they urged him to stop, the more obsessed he became. Over time, he began caring less and less about actually helping other Transformers and more about discovering the secrets of life, eventually deciding that the end was worth any means, no matter how cruel.

His most infamous accomplishment toward this goal was taking the slain bodies of his compatriots and reactivating their motor functions with extremely limited mental faculties, capable of following basic instructions. However, because they didn't retain any real intelligence or semblence of their old selves, they were likened to zombies, and Flame became the target of ridicule and scorn from other scientists. Thrown out of the Academy and called a disgrace to science, he nonetheless has refused to give up.

Now, Flame devotes equal time to fighting the Decepticons and continuing his research, hoping to end the war so that science can once again be allowed to fourish. He creates unusual but effective weapons and tools to aid the Autobots' efforts, and in return is granted some leeway in his experimentation.

In 2014, Flame was transferred to Earth. After weirding out Benin-Jeri and First Aid, Flame heroically battled Starscream and hitched a ride on the Air Commander in a brave attempt to rescue Metroplex from Decepticon control. Although his efforts proved ultimately unnecessary as other Autobots accomplished the task, Flame's actions earned him respect among the Autobots present that day.

Flame is a member of the Autobot Science division.