This page is for the evil Shattered Glass Protectobot. For his heroic Autobot counterpart, see First Aid. 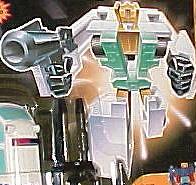 FIRST AID has dedicates his life to pain. Before the war, he was a doctor who was nearly arrested for his illegal and unethical medical practices. However, once Emperor Prime his brutal reign of terror, First Aid found a new use for his unique talents and interests: interrogator for the Autobot Secret Police. First Aid can brutalize a suspect to the point of death, and then bring them back for more "questioning." First Aid cares little about what actual confessions or information can be gleaned - he just likes to push the boundaries on how much terror and torment he can inflict upon a fellow being before they are driven over the edge and beyond.

In Toyota Town Ace ambulance form, First Aid can travel at 140 mph with a range of 500 miles. He carries a dual-barreled decrystallizer cannon, which disrupts the crystalline structure of most metals, reducing their tensile strength and making them vulnerable to fracture. In robot mode, he carries a photon pistol that shoots light-bursts with the equivalent brightness of 5,000-watt light bulbs, enough to temporarily blind all but those whose optical sensors are the most heavily shielded. Each of his fists can emit a high-temperature, narrow laser beam, which he uses for welding during surgical procedures. He combines with his fellow Protectobots to form the giant robot known as Defensor.

Other than the aforementioned tendency to be distracted, First Aid occasionally suffers from electrical system breakdowns, particularly when he uses his decrystallizer cannon. This sometimes leaves him unable to perform simple functions, such as turning on his lights, or worse, leaves him completely immobilized. This is a BAD THING when surrounded by people he has tortured to the edge of insanity.

" I'm sure you've discovered my deep and abiding interest in pain. Presently I'm writing the definitive work on the subject."[1]

Before the war, First Aid was a doctor who was nearly arrested for his illegal and unethical medical practices. However, once Emperor Prime his brutal reign of terror, First Aid found a new use for his unique talents and interests: interrogator for the Autobot Secret Police. He now gleefully tortures anyone Nightbeat happens to bring into the station, with nary a concern whether the suspect is "guilty" or "innocent".

First Aid is a founding member of the Protectobot hit squad, gleefully following the orders of Secret Police chief Nightbeat.

"Only pain can bring true clarity."

Shattered Glass First Aid is a master of inflicting pain.

First Aid is available for temping.