This page is for the heroic Autobot Protectobot. For his evil Shattered Glass counterpart, see First Aid (SG). 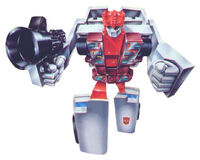 First Aid is one of the most empathic and compassionate beings you'll ever meet. He cares deeply about all living things. Heck, he even cares deeply about the "pain" of inanimate objects. A broken or malfunctioning can-opener will earn just as much sympathy and attention as a fellow Autobot. Otherwise, First Aid is a soft-spoken and sometimes overly cautious sort (especially when it comes to the well-being of a fellow Autobot). Still, all the Autobots know he will work long and hard to do his best for them and that their well-being matters to him more than anything, and those are quite comforting thoughts.

In Toyota Town Ace ambulance form, First Aid can travel at 140 mph with a range of 500 miles. He carries a dual-barreled decrystallizer cannon which disrupts the crystalline structure of most metals, reducing their tensile strength and making them vulnerable to fracture. In robot mode, he carries a photon pistol that shoots light-bursts with the equivalent brightness of 5000-watt light bulbs, enough to temporarily blind all but those whose optical sensors are the most heavily shielded. Each of his fists can emit a high- temperature, narrow laser beam, which he uses for welding during surgical procedures. He combines with his fellow Protectobots to form the giant robot known as Defensor.

First Aid is a member of the subgroup Protectobots and forms the left arm of the combiner robot Defensor. Maybe that arm never punches anything? It probably handles the force field.

Hot Spot, First Aid, Streetwise, Groove and Blades were brothers created on Cybertron millions of years ago to be emergency service specialists and joined the Autobots shortly after their creations to put their skills to use. They were separated on different assignments and eventually ran into each other again in 1985 when they were brought to Earth and rebuilt as an Earth-based emergency services squad, which occasionally helps out the Autobots on Cybertron to this day.

When the Insecticons attacked an inhabited city on Earth, Optimus Prime called upon the Protectobots to evacuate the civilians caught in the crossfire. First Aid helped an injured man discovered by Streetwise. Later, as Earth's orbit was diverted to the Sun by the Combaticons, First Aid brought civilians to a meat locker that Groove and Streetwise had commandeered to help the humans cool down.

First Aid, as part of Defensor, was the arm that wielded the rifle which totally blew up Bruticus. Afterwards, he was with the Protectobots when they saved some window-washers from a burning skyscraper. Later still, First Aid and the other Protectobots were ordered to help defend Autobot Headquarters from a Decepticon attack. They merged into Defensor and activated his useless force field, which almost immediately deactivated, allowing the Decepticons to blast Defensor back into his component parts.

First Aid usually operates out of Autobot City, and in 2012 worked on curing a strange nanovirus that afflicted Jetfire.

In 2019, First Aid was reassigned to Delphi to assist Pharma's research.

First Aid's pacifism is only demonstrated in the original cartoon - his fellow Protectobot Groove is supposed to be the pacifistic one. In his various comic appearances, First Aid seems to have no problems fighting his enemies. As we follow cartoon continuity, on the MUX both First Aid and Groove are pacifists.

Hey guys. We've got all the survivors from the Fallen. I'm still working with Ratchet on them but it doesn't look good ok? But last night some people came through the bridge. Said they were Autobots. Looked like Autobots.... but they came through the bridge. Said they were from Caminus. The leader, Pyra Magna, demanded to speak to Prime. Inferno told her to shove it and she'd have to talk to Elita. She's now staying with us. Don't know what else to say."

Scales investigates the holes in the ground left by Fortress Maximus previously.

Cerebros, Spike, and Fortress Maximus all consider what could have gone better.

First Aid was played by Telerius in 2002. He is currently available for application. In the meantime, he's been temped by Bzero and SpikeWitwicky in general, SpikeWitwicky in Flashbacks, and Zero for the Spotlight Imager TP. As of 2019, First Aid is temped by CalyhexInmate.

FIRST AID has dedicates his life to pain. Before the war, he was a doctor who was nearly arrested for his illegal and unethical medical practices. However, once Emperor Prime his brutal reign of terror, First Aid found a new use for his unique talents and interests: interrogator for the Autobot Secret Police. First Aid can brutalize a suspect to the point of death, and then bring them back for more "questioning." First Aid cares little about what actual confessions or information can be gleaned - he just likes to push the boundaries on how much terror and torment he can inflict upon a fellow being before they are driven over the edge and beyond.