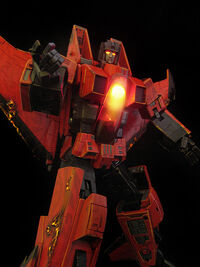 A member of an obscure squad of Decepticon air warriors known only as "The Rainmakers," FIRESTORM is known as an individual only to his teammates and a very few others. Aside from creating ionic acid rain, FIRESTORM has the ability to use explosives to create conflagrations which attain such intensity that they create and sustain their own wind systems. This wind shear is capable of producing small tornado- and dust devil-like circulations called fire whirls which dart around erratically, damaging or destroying houses and buildings, and quickly spread the fire to areas outside the central area of attack. In spite of his great power, however, FIRESTORM is a simple pyro, likely to waste all of his ammunition setting fires for fun and wind up out of fuel when needed for actual missions.

During Megatron's four-million-year nap on Earth, Firestorm reported to Shockwave on Cybertron.

Firestorm remains on Cybertron in service to Cyclonus, but has obtained an Earth altmode in case he is transferred to Decepticon City.

Firestorm was one of the Seekers sent down into the Cybertron Underworld in 2015 to prevent the Autobots from interfering with Starscream's plan to use Alpha Trion to bring Megatron back from the dead. When faced off against Vector Sigma's Centurion Droids, Dust Devil shined a laser pointer into Firestorm's optics, causing him to cry out in pain and surprise. This triggered an attack by the Centurion Droids, and Firestorm was beaten to near senselessness before finally escaping when Starscream had achieved his goals.

Firestorm is available for application or temping as a Disposable Character.