This is the page for the heroic female Autobot. For her evil Shattered Glass nemesis, see Firestar (SG). For her protege, see Flareup. 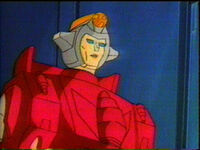 With the ability to quite literally drive into the heart of a fire, FIRESTAR is perfectly suited for search & rescue operations. With her standard laser sidearm and specially-modified fireman's energy axe, Firestar can quickly pull survivors out of dangerous situations. She is aided in these operations by an infrared energy sensor that allows her to quickly locate trapped comrades, and a high-powered surgical laser that enables her to cut free anyone trapped by fallen debris. When needed to, Firestar can also start fires of almost surgical detail with her internal plasma generators. In her altmode, a Cybertronian transport, her cargo area is large enough to carry out wounded or incapacitated comrades. When not on hazardous duty, Firestar finds truest friends in others open to risk. Her desire for action often puts her at odds with her commanders, as she tends to disobey orders and stray from her assigned tasks.

She is one of the members of Elita One's Autobot resistance and specialized in rescue missions. Practical and unprepossessing, she is nonetheless particularly useful during thefts of Decepticon Energon cubes, as her vehicle mode is capable of transporting large numbers of them.

Firestar is a close friend of Inferno and Chromia.

Four million years ago, Firestar tried to board the Ark, while it was being attacked, with the rest of Elita One's team. The plan failed though, and she and the others appeared to be destroyed.

Millions of years later, in the early 1980s, Firestar participated in a raid on one of Shockwave's energon supply stores, and fell under attack when the group was discovered thanks to Moonracer's carelessness. They managed to escape and the team returned to their hidden base with the stolen energon.

The Decepticons attacked again, however. Trying to capture Elita One, Rumble caused the Female Autobots' underground base to collapse, with most of them in it. They survived and managed to free themselves some time later. In search for their leader, they met up with a team of Earth-stationed Autobots who had come looking for their commander. Firestar was briefly reunited with her friend Inferno and together they helped fight off the Decepticons the Earth-stationed Autobots had gotten themselves in a fight with. She remained on Cybertron with the rest of Elita One's team when Optimus's team returned to Earth.

Firestar is currently on Cybertron, assisting Elita One. She accompanied Elita One Cybertron in order to help protect Alpha Trion while he investigated evidence that the Temple of Knowledge had been found and breached. Entering the Temple, the Autobots discovered a hidden portal to the Shattered Glass universe. Passing through the rift, the Autobots encountered Shattered Glass Cyclonus, Professor Razorclaw, and Commander Starscream. The Autobots offered to help the Decepticons against the evil Autobots from that universe, as well as their invasion by mad Junkions led by Ultra Magnus.

The Autobots were attacked by Captain-Mal aboard the pirate ship V'ger, with the help of Razorclaw was able to drive off Mal's crew and capture his ship. Once Chromia had scanned the ship for obvious traps, the V'Ger was boarded by Dust Devil, Firestar, Krunix, Stormwind, and Typhoon. Typhoon moved Longsight to the brig, while Dust Devil took command of the bridge and Stormwind discovered Aria cowering in engineering. After much coaxing by Blizzard and Stormwind, Aria came out of hiding, and eventually agreed to assist the Autobots in maintaining the ship for them. Dust Devil promised Aria the ship would be turned over to her command after the Autobots were through using it. When Blizzard examined one of Aria's little "assistants," she discovered it contained the core of Laserbeak, who begged Blizzard to end its existence. Instead, Blizzard built Laserbeak a new body from parts left around the V'Ger.

Firestar was on the V'ger when it crashed in Kaon.

Needing a scan of the Old One's Stellar Spanner in order to build a machine to close the rifts between the Shattered Glass universe and his own, Alpha Trion conceived a plan to lure the Old One out of Iacon and send in Chromia and Firestar to infiltrate the Autobot base. Using fake IDs programmed by Alpha Trion, the femmes were able to slip easily past Autobot guards Flattop and Subsea and venture into the city. After some minor run-ins with some additional SG-Autobot guards, Firestar and Chromia were able to successfully scan Old One's Stellar Spanner and return the schematics back to Alpha Trion.

When Chromia and Firestar returned with the scans, they brought a mortally injured Frenzy (SG) with them. Chromia vowed his death would be avenged, but Frenzy stressed his wish to have no more bloodshed. Though Alpha Trion wasn't able to heal Frenzy's injuries, he was able to alleviate the pain he suffered from his injuries, and as a result, Frenzy died a peaceful death, surrounded by a new group of Autobot friends with Chromia was comforting him. Using the information brought back by the Autobot femmes, Alpha Trion isolated himself to work on a device to close the rifts, while Dust Devil worked with Trailbreaker to set up defensive installations in the temple.

Ultra Magnus discovered that the Terminus Blade was being held in the Temple of Knowledge, and hatched a plan to destroy Cybertron. After sending a warning to Jetfire to tell Optimus that Cybertron was about to be destroyed, Magnus teleported into the temple with the use of one of Wheeljack's Stellar spanners. Magnus attempted to kill Alpha Trion, but Trailbreaker defended Trion from the attack with one of his forcefields. Tracks was dispatched to stop Blaster, and was able to drive Blaster back and burn out one of his optics. Wreck-Gar focused on acquiring the Terminus Blade from Dust Devil, and brought back several Autobots from the dead to use as his minions. Wreck-Gar and his Junkions, however, were kept at bay by Firestar's fire. Magnus attempted to use a doomsday device to destroy Cybertron, but before Wheeljack was able to complete the device Dust Devil preemptively activated it with the Terminus Blade. Magnus attempted to escape with the Terminus Blade before the doomsday device detonated, but Trailbreaker tossed it through the Wheeljack's portal before it closed. It is unknown if Magnus and his troops survived the detonation.

Dust Devil survived his near-fatal attempt to destroy the doomsday device, but lost the sword to Magnus. Alpha Trion, Benin-Jeri, and Firestar repaired Dust Devil's wounds enough to keep him alive, but Trion's assessment is that Dust Devil will need to be completely rebuilt as soon as they get back to Iacon, as his injures are so deep that he may not survive another armed conflict.

In 2017 she helped defend Iacon against an assault by Trypticon.

draw off the Old One so the Femmes can attempt an infiltration.

Firestar is currently being temped by SpikeWitwicky, but is still available for application. She was briefly temped by bzero for the second half of "Autobot Invasion".

Retrieved from "https://tfumux.fandom.com/wiki/Firestar?oldid=63654"
Community content is available under CC-BY-SA unless otherwise noted.