This page is for the heroic (if spacey) Aerialbot. For his evil (if spacey) Shattered Glass counterpart, see Fireflight (SG). 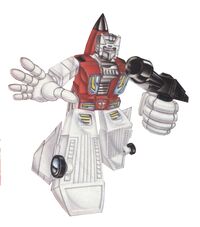 If Aerialbots needed pilot's licenses, Fireflight would certainly never have gotten his. He's a definite hazard in the skies. He becomes mesmerized by the spectacular views he sees from above, and, consequently, often pays little attention to where he's going, leading to near-crashes with buildings, mountains, even other aircraft. Only constant prodding by his fellow Aerialbots keeps Fireflight's mind on his assigned tasks. But they can't get angry at him - they realize his carelessness is a result of what humans would call "a childlike sense of wonder," and they can hardly fault him for that. Still, flying alongside him is definitely unnerving to the other Aerialbots; "Sometimes I wonder whose side he's on," says Skydive.

Fireflight can fly at speeds up to Mach 2.0 with a range of 1000 miles. In F-4 Phantom II jet mode, he can shoot missiles that explode and release a mist of highly flammable liquid he calls "fire-fog." In robot mode, he uses a photon displacer gun, which severely distorts visual images by altering the course of photons in light waves. Anyone within the vicinity of a blast from this gun would not be able to see things as they actually are until after the gun's effects wear off, which can take up to five minutes. He combines with his fellow Aerialbots to form the giant robot known as Superion.

As well as being a danger to others, Fireflight is even more of a danger to himself. He just flies badly. And any human passengers inside his cockpit would all too quickly discover this fact - his sudden jerks, jolts, hairpin turns and rapid velocity changes can easily result in a severe neck sprain, at the very least. His poor flying technique also makes him very fuel inefficient.

At one point during the eternal war with the Autobots on Earth, Megatron grew fed up with how his opponents ruled the roads and created a group of Decepticon cars known as the Stunticons. In order to give his new warriors life, he brought them to Cybertron and tracked down the ancient supercomputer, Vector Sigma, to input cybernetic personalities into the Stunticons. Thanks to a series of traps and drones in their way, the Autobots failed to prevent Megatron from succeeding and returning to Earth. Seeking to even the playing field, Optimus Prime conceived of the idea of retrofitting several broken-down Cybertronian ships into Earthen jets, and bringing them to life as a team of Autobot flyers. With the help of his tech-savvy soldiers, Hoist, Wheeljack, Ratchet, and Prime's own creator, Alpha Trion, Optimus's plan was enacted and the Aerialbots were born.

Because Optimus Prime specified to Vector Sigma that the Aerialbots be given personalities that required them to learn and grow, and make their own decisions, however, Fireflight and his friends were not instantly bound to the Autobot cause. Their sense of pride in their flying ability caused many of them to look down on the other Autobots. As the Aerialbots became impressed with the Seekers' flight skills, their wide-eyed nature caused them to fall into a Decepticon trap. Turning the Kronosphere on the hapless Autobots, Megatron sent the Aerialbots back in time nine million years. Their journey led them to the earliest days of the war, and they personally saw Megatron maliciously gun down unarmed Cybertronians in his quest for power. Fireflight and the other Aerialbots returned to the present with an unshakeable commitment to seeing the Decepticon threat ended.

Fireflight and the Aerialbots attended the coating ceremony for the Statue of Liberty, which was being covered with Perceptor's new invention, Corrostop, to prevent corrosion. Unfortunately, the Decepticons were just as interested in Perceptor's work, and the Stunticons arrived to kidnap him. Fireflight and the others chased the Stunticons aboard Blitzwing all the way back to the Decepticons' undersea base, but were driven off by the Lightning Bug. This impressive heat ray zapped Fireflight's wing, and he had to pick up some replacement parts back at the Ark for repairs.

Fireflight's spacey demeanor got his partners in trouble from time to time. As the Aerialbots were searching the Middle East for a squadron of stolen jets, Slingshot and Skydive found the jets being reprogrammed by Megatron and the Decepticons as a remote-controlled air force. The two Aerialbots summoned their fellow flyers, but while Silverbolt and Air Raid turned up quickly, Fireflight was lost out somewhere in the sands for a good portion of the battle with the Giant Purple Griffin, leaving his teammates vulnerable and unable to combine and form Superion. Only after he finally got his head together and followed up on Skydive's signal did the Aerialbots manage to gain the upper hand.

Fireflight currently operates out of Autobot City on Earth.

Hey. Sorry for the delays in this report. I uh, forgot.

Anyways, I was flying in patrol formation near Chicago, when I ran into - not literally, Slingshot! - Kilafrost. After a few minutes, we spotted flashes on the horizon, and we went to investigate. Turns out Starscream was just shooting up the airport like the bully he was. We engaged him, and I managed to even hit him! Course, he did not like THAT and got me so badly it almost sheared my wing off. :(

He was driven off when Sit-Com arrived not long after though, and I don't think too many people were hurt at least. I'm back at base now waiting for the repairs to finish. Fireflight out.

Fireflight is available for application. In the meantime, he was being temped by horsetuna.