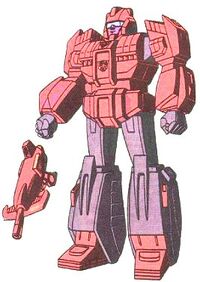 "You're either out of my way or out of luck."

Fastlane is the younger clone brother of the Autobot Cloudraker. He is also far more immature than Cloudraker. Although this is often the case between siblings of substantially different ages, Fastlane was created only .0005 seconds after his brother! But it is perhaps that tiny time differential that accounts for the great difference in their personalities. Fastlane is a thrill-seeking showoff who is always looking for new ways to get his kicks. He's made reckless driving a way of life. But he's more mischievous than malicious about it. In fact, his asphalt antics have proven to be so entertaining to onlookers that both Autobots and humans alike regard him very favorably. His most notorious stunt occurred several thousand years ago on Cybertron: In an attempt to prove that he could make a 360-degree turn on a crowded highway in the space of 30 feet while maintaining a speed of 500 miles per hour, he caused a 4,236 vehicle accident. Traffic was tied up for over 200 miles and didn't get back to normal for over a week. But all those involved had a good time as they untangled themselves from one another, and, most importantly to Fastlane, he proved that he could do what he set out to do.

In vehicle mode Fastlane can attain a maximum speed of 220 miles per hour and has a range of 350 miles. By engaging his rear-mounted booster jets he can increase his maximum speed to 550 mph, but not for more than five minutes at a time. In robot mode he carries two powerful sonic boom rifles. He can adjust the frequency and amplitude of the guns' blast so that their effect can be as delicate as changing the direction of a falling feather or as dramatic as shattering a block of foot-thick steel.

Unaware of or, perhaps more accurately, refusing to acknowledge his own limitations, Fastlane often unintentionally incapacitates himself as a result of his antics. For example, during some of his more demanding stunts, he typically burns out his servo-motor circuits, which activate and control high speed movements in his joints.

Fastlane and Cloudraker served Ultra Magnus on Cybertron during the Lost Years. They now report to Elita One.

Fastlane and Cloudraker defend Cybertron unless called to Earth.

Fastlane is available for application.

Retrieved from "https://tfumux.fandom.com/wiki/Fastlane?oldid=30002"
Community content is available under CC-BY-SA unless otherwise noted.