This page is for the evil Decepticon Eyegor. For the Evil, Inc. Junkion, see Eye-Gore. 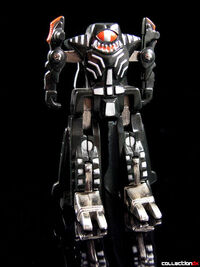 EYEGOR is the tactical brains of the exploration ship Cronos. A very passive mech in comparison to his comrades, he suffers from an inferiority complex that isn't helped by how often his advice is ignored. For this reason, he often tries to stand out in other ways, seeking the slightest bit of recognition whether positive or negative. This may in fact be why he follows Megatron, believing that he can make a better name for himself as part of the glorious rebellion of the Decepticons... though ironically he has only found himself in an even more isolated position than ever before. It's difficult to get a straight answer out of him about it though, or anything personal for that matter, as his typical response is simply "That's just how things are." Is this fatalistic attitude just a front to cover up his insecurities? Probably. His weapon of choice is a sickle-like blade on a chain with a weight at the other end, allowing him to at least try to control his enemies if nothing else, by either keeping his distance or grappling them or their weapons. His altmode resembles a cross between a stag beetle (with functioning jaws!) and a long, boxy spacecraft or undersea vehicle, fitting as it functions equally well in both environs.

Available for application as an FC.