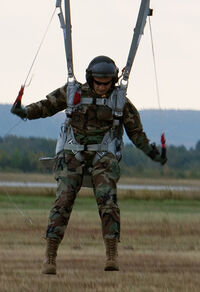 EVAC is an extremely dedicated medic and soldier. Fascinated with medicine since an early age, Evac received extensive medical training from the US Air Force, and is all too happy to repay his debt to the government for its assistance. A young officer and accomplished field medic, Evac isn't above fighting his way to a downed soldier and defending wounded with force if necessary. Evac goes into battle with a number of small arms in addition to standard medical supplies. Off duty, he pursues a love of music, and if often heard softly strumming his guitar. On duty, Evac is generally laid-back, but becomes deadly serious when his comrades are in danger.

Jason Morera is the US-born son of Native Mexican guest workers. As a kid, he really wanted to be a musician, but an injury to his left hand limited his ability to play the guitar at a professional level. During his recovery, he became very interested in medicine, dreaming of becoming a doctor although his family's financial status made the prospect of medical school dim. Joining the Navy, Evac had originally applied to be a SEAL, but washed out of the SEAL training program. When his Navy tour ended, he transferred to the Air Force, becoming a Parajumper and earning A National Registry of Emergency Medical Technicians-Paramedic (NREMT-P) certification. While serving as a parajumper, Evac earned an associate degree in survival and rescue through the Community College of the Air Force through the Montgomery GI Bill, and then a Bachelor of Science Degree in Emergency Medical Services through the University of New Mexico School of Medicine. Evac served as a parajumper in Afghanistan before joining the GI Joe team. In joining the Joes, Evac was commissioned as a United States Air Force Combat Rescue Officer, although he continues to Provide medical care to Joes in the field.

Evac joined the Joes in February of 2003. After serving for years on the FLAGG, in 2013 Evac was deployed to Canada to help with local flooding. In August he was recalled for the Quintesson Invasion TP, and helped to rescue an injured Ace, Chance, and Nightingale after a Pit invasion by Quintesson transorganics.

In December of 2016, Evac helped deliver supplies to snowed-in Canadians. Later that month in New York, Chance and Evac reactivated the original Pit on Staten Island to use as a secret base for retaking the city back from Cobra. The two Joes were prepared for anything upon entering the abandoned compound, but faced nothing more dangerous than an old-fashioned fold-down ironing board.

In 2017, Evac was assigned to Strike Team Bravo.

Evac is loosely based on a former character BZero played at Transformers 2k5 named Dr. Morrera.

Due to mind-swapping with G.I. Joe during the Mindswap TP, Evac became privy to some highly sensitive information, which meant when the TP ended he was more or less shanghaid into helping with General G.I. Joe and G.I. Jane's secret project. This continued until Cobra Commander assaulted the base directly, and Evac assisted by helping the wounded.

Evac was created and is played by the MUX Co-Director BZero. Evac has been a character on the MUX since February of 2003.

Having grown up among illegal migrant workers in Cobra’s America, EVAC knows a thing or two about staying underground and not garnering notice of those in charge. Since being recruited into the G.I. Joe militia, Evac has honed these skills, as well as learning how to extract others in trouble and tend to their wounds. Although he doesn’t enjoy violence, he’s become very good at it, and isn’t above carrying out an assassination of it will potentially help the G.I. Joe cause. With each kill, Evac loses a little more of his humanity, but at this point, he’s no longer really missing it.

In Joe World, EVAC is a globe-trotting hero, using G.I. Joe’s vast resources to stage daring rescue missions across every continent and sea. With most combat situations soon neutralized by G.I. Joe’s advanced weapon technologies, Evac can focus on natural disasters, although with the creation of the Weather Dominator, even those are becoming fewer and far between. Nonetheless, there is still plenty for Evac to do, and he enjoys his work even more than most.

Retrieved from "https://tfumux.fandom.com/wiki/Evac?oldid=76578"
Community content is available under CC-BY-SA unless otherwise noted.