View source
The name or term Elita One refers to more than one character or idea. For a list of other meanings, see Elita One (disambiguation). 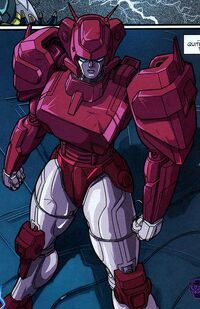 Elita-One is an excellent sniper, and the fiery field commander of the Female Autobots assassination squad. After years of leading a campaign of destruction against the Decepticons on Cybertron, Elita-One is tough, courageous, and charismatic. She wouldn't think twice about sacrificing her troops for the good of Prime's cause, but she prefers to let her foes do the dying. After vorns of covert operations, Elita-One prefers silent assassination over noisy combat, but when it is needed, she packs a powerful punch in the form of an advanced heavy laser pistol. She is a genius in the field of tactics and guerrilla warfare, and is a formidable foe when faced one-on-one. Although an influential figure in Prime's army, she's getting tired of following orders, and is looking for an opportunity to rise further in the command structure, through assassination and friendly-fire, if necessary. With Prime stranded on Earth, she may finally get her chance.

During the Golden Age of Cybertron, there lived a robot named Ariel, a librarian with a coworker called Optronix. When Optronix started his rise to power, Ariel noticed and latched on, seducing and destroying many of Optronix's potential enemies to help pave the way for his ascension. When Optronix acquired the Matrix and dubbed himself Optimus Prime, Ariel was rewarded for her efforts with her own upgrade, crowning herself Elita-One.

Elita hoped to marry her fortune to Optimus’s, ruling at his side, but was disappointed as Prime turned his attentions elsewhere. For a time, assassination kept her occupied and busy, but now she is starting to chafe at her perceived glass ceiling, and it looking to see who she needs to eliminate to rise higher in the Autobot Command structure.

When Prime launched his Ark to Earth, Elita-One begged him to take her with him, wanting to get in on the glory and slaughter of a virgin new world. Prime refused, and even launched missiles into her direct location as she fought to defend the Ark while it was launched. Elita survived this attempted 'sacrifice,' and quickly marshalled her forces to take command of the Autobots on Cybertron before any other interlopers get the chance. Recently Alpha Trion contacted her and offered his help in cementing her rule by eliminating any other competition. With Prime gone, Alpha Trion is once more exerting his influence over her, becoming the shadow behind the throne.

After months of work, Elita-One and Cyclonus have reached an agreement brokered by the Old One to join forces against the Junkions. This combination of forces, with the Old One advising each leader, has put the Old One in de facto command of the entire planet. In 2013, Elita-One was called to Earth to participate in Prime's attack on Autobot City. It didn't end well.

Elita-One is available for temping in the Shattered Glass TP.

For now, she's temped by bzero.