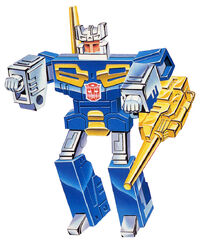 Simple descriptive phrases are insufficient for a confirmed Earthen sports fanatic like Eject. Sports cliches clutter his everyday conversation. To him, a surprise attack on the Decepticons is "a fast break." A victory is a "touchdown." Destroying an enemy is "hitting a grand slam." Few of the other Autobots understand anything Eject says, but they all appreciate the enthusiasm with which he says it. Eject's attention was first drawn to Earthen sports by the competitive spirit that characterizes them. Where he comes from, Cybertron, such a commitment of passion and energy is now only known in the field of war. He therefore found it both surprising and fascinating to observe it in an entertainment. Now Eject is a devout follower, finding sports to be an immensely enjoyable diversion (some would say "obsession"). But more importantly, he views sports with the fervent hope that one day it will forever replace war as the way for opponents to settle their differences.

Eject has the talent to be a play-by-play announcer in most major sports, but lacks the opportunity. In cassette mode, he is able to monitor and record local radio and television broadcasts, although he is more likely to tape Monday Night Football than a news bulletin on a Decepticon raid. He can also decode scrambled signals and tap into telephone conversations. In robot mode, he uses an overload gun, which temporarily disables its target by releasing a powerful burst of electricity into its target's neural circuitry.

Many important broadcasts are overlooked by Eject because of his preoccupation with monitoring sports. This sometimes results in disaster not only for him but also for the Autobots who rely on him. At times his internal tape snaps if he's recording something that gets him particularly worked up and tense, such as Nolan Ryan going for a no-hitter.

Eject was an arena sports fan on Cybertron before the war. After Megatron's attack, Eject joined the Autobot resistance, working as surveillance officer under Ultra Magnus. In 1986, Eject was reassigned to Earth, and was rebuilt by Blaster to be part of his tape squad.

Eject is usually found either in Autobot City's Comm Tower when on duty, or at various sporting events when on leave. Eject spent much of 2011 attempting to ferret out information on the Decepticons prior to the Autobots launching their attack against the Decepticons' arctic bases. Eject is currently working out of Autobot City, reporting to Jazz and Metroplex while Blaster is on Cybertron.

In 2016, Shattered Glass Eject travelled to Earth with Blazter.

This character last had a player in February of 2010, and is now being temped by BZero, but is currently available for application.