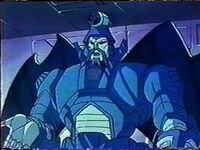 DREDCLAW lives for the hunt... he is the Sweep most adept at close-range pursuit and capture. He is inspired to frightening levels of ferocity when a target lies in his sights. He rarely opts for the quick kill, instead getting murderous pleasure from making the hunt as drawn-out and painful for his prey as possible. As a sweepcraft, he has infrared and ultraviolet optical sensors, faster-than-light capabilities, and a high-powered ceramic dart turret. As a robot, he has a laser rifle he often disdains in favor of his claws. His skills include hunting, torture, pack-tactics, and weapons design and modification. He is prone to carelessness due to overconfidence -- he isn't quite as good as he thinks he is.

Dredclaw was created from the wreckage of an unfortunate Decepticon long-range patrol that ran afoul of Unicron. Sent to Earth, Dredclaw was originally subservient to the Chaos God, but since Unicron's destruction Dredclaw is a free agent. He has chosen to throw his lot in with the Decepticons, gleefully hunting down insurgents on the planet Cybertron.

As of 2013, Dredclaw has a permanent Player.