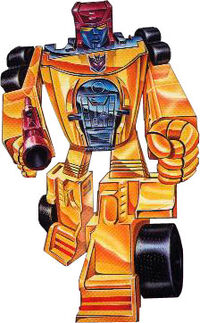 "The first one to cross the finish line lives!"

Drag Strip would rather be scrapped than lose. It doesn't matter what the competition is he's involved in - racing, fighting or even just trading insults - Drag Strip always aims to come out on top. Maybe it's because he needs to feel important, maybe he enjoys humiliating others. It makes no difference; to beat an opponent, he'll pull the nastiest, most underhanded tricks. And he relishes his victories - he makes certain everyone within earshot knows about them. He loves to gloat. His fellow Stunticons feel he's a selfish, egotistical boor and would just as soon not have him around. Even Decepticon Leader Megatron finds him insufferable and would sooner smelt him than talk to him. But he knows that as rotten as Drag Strip is for the Decepticons to be around, he's even worse company for the Autobots. And that, in Megatron's opinion, is a character trait to be much admired.

In Tyrrell P34 Six-Wheeler race car mode, Drag Strip can reach speeds of 250 mph and comes equipped with a plasma energy blaster that shoots an explosive ball of energy a distance of 2000 yards. In robot mode, he uses a gravito-gun that enhances the gravitational field of a localized area so that anyone walking into the area would either be crushed by the increased gravity or have his body ripped apart as the gravity pulls him from different directions. He combines with his fellow Stunticons to form the giant robot, Menasor.

In car mode, Drag Strip is prone to overheating, particularly at high speeds. His cooling system has been known to explode. He also suffers from the ill will of many of his fellow Decepticons, a definite liability in battle when he might require their cooperation.

After a failed attempt to steal experimental superfuel from United States military, Megatron realized that while the Decepticons controlled the skies, the Autobots had supremacy on the ground, and so they needed new ground-based warriors who could out-drive and out-fight the Autobots on their terms. Rumble was sent to steal various human vehicles that would be rebuilt into the new Stunticons. In Drag Strip's case, Rumble targeted the winner of a Formula 1 race on national television, which was a bad idea really, as it alerted the Autobots to Megatron's scheme. The Decepticons journeyed to Cybertron, beat the Key to Vector Sigma out of Alpha Trion's possession and ordered the ancient supercomputer to give life to the Stunticons.

Whilst the Autobots were trapped on Cybertron, the Decepticons returned to Earth with the newly awakened Stunticons who began wreaking havoc and damaging the Autobots' good name by attacking the US military base containing the experimental rocket fuel. Eventually, the Autobots returned with the newly built Aerialbots whose combined form Superion defeated the Stunticon combiner Menasor.

Despite this defeat, the Stunticons were the key component in Megatron's elaborate scheme to hold a fake charity race from Paris to Istanbul so he could steal US driver Auggie Cahnay's experimental car which would be melted down to house the powerful Pearl of Bahoudin. One by one, the Stunticons disabled the Autobot participants assigned to protect Cahnay, but the downfall of Megatron's plan came when he ordered the Stunticons to stop going after the remaining Autobots. Together, Cahnay, Bumblebee, Tracks and Bluestreak defeated Menasor and destroyed the Pearl of Bahoudin.

When Megatron needed additional equipment for his latest secret weapon, he sent the Stunticons out to steal it for him. Drag Strip and Dead End stormed a U.S. military base and scooped up a new experimental generator for their leader. On the way back, Drag Strip kept trying to taunt the disinterested Dead End into racing with him back to base. Their racing was interrupted, though, by the Autobots Tracks and Warpath. Drag Strip was knocked for a loop by Warpath's rapid-fire shells from his turret gun. Brought in to Autobot custody, the Stunticons were held prisoner while Optimus Prime and the Autobots used camouflage paint to disguise themselves as the Stunticons in order to enter Megatron's good graces and learn the purpose of the stolen equipment. Mirage, the Autobots' spy, took Drag Strip's place. The Stunticons did manage to break loose, though, and smashed their way out of the Ark as Menasor and made their rendezvous with Megatron, only to find themselves confronted with a faux Menasor, created by a combination of Mirage's illusions and Windcharger's magnetism. The real Menasor easily broke the delicately bonded "Menasor", but the Autobots had also sabotaged the equipment before handing it over to Megatron. After the super-cannon exploded, the Stunticons fled the battle.

When Megatron was infected with Cosmic Rust after a trip to the lost Autobot colony of Antilla, the Stunticons were assigned to capture the Autobot scientist Perceptor, who had developed the powerful anti-corrosion Corrostop. Drag Strip water skiied behind a speedboat driven by Wildrider, allowing him to force Perceptor to back into the waiting Motormaster. After Megatron cured himself and infected the Autobots with the Cosmic Rust, Menasor attacked the Statue of Liberty in New York City with the ancient Lightning Bug heat ray, intent on stopping the Autobots from matter-duplicating more Corrostop from the layer they sprayed on the statue. Superion defeated Menasor and destroyed the Lightning Bug.

After Starscream was banished for yet another failed coup, he returned with a powerful new Decepticon team called the Combaticons who were able to outfight Autobot and Decepticon alike. With Megatron needing a trump card, Soundwave attempted to call on the Stunticons to help, but Drag Strip said to tell Megatron to blow it out his exhaust pipe. However, the Stunticons belatedly arrived after the Combaticons' combined form of Bruticus defeated Devastator and forced Megatron to acknowledge Starscream as the new Decepticon leader. Realizing that Starscream would not stop at Megatron, the Stunticons merged into Menasor and disabled Bruticus in one mighty punch.

Drag Strip last had a player waaaay back in December of 1997. He is currently temped by Bzero, but is still available for application.