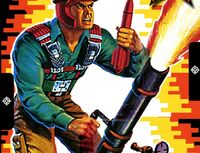 A highly mobile, rapid strike force like G.I. Joe can't depend on slow, ponderous artillery to keep up with them. They need to bring their own fire-support with them in the form of a high-powered mortar, but a mortar man can only carry a limited number of shells, so he had better be able to make every shot count! DOWNTOWN can judge range and trajectory just by eyesight. If he knows where the target is, he can hit it!

While playing high school basketball in Cleveland, Ohio, Thomas P. Riley picked up the nickname "Downtown" for never missing a foul-shot. Once in the Army, he became skilled enough with firing mortars that he can judge range and trajectory just by eyesight. Downtown served with the G.I. Joe team on a number of missions before the team was shut down in 1994.

Downtown was reinstated with the rest of the team, and was made a reserve member.

In 2015 Downtown was recalled to the Pit and assigned to Strike Team Bravo.

Downtown is available for application.