This page is for the heroic Autobot Downshift. For his evil Shattered Glass counterpart, see Downshift (SG). 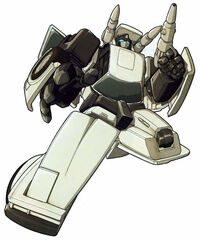 Nothing pleases DOWNSHIFT... or so he thought. Back on Cybertron this battle-weary soldier had fought for so many millennia that he began to wonder whether it was really worth it for him to continue. But once he came to Earth he found everything around him fresh and new and he for a time he delighted in all that his optical sensors saw. He particularly enjoys the company of human children, or, as he likes to call them, mini-men and mini-women (although he has as much trouble telling them apart as some of his fellow Autobots do). However, all too soon his depression returned as he began to fear all the Decepticons could now take from him. His sullenness about the Autobots' mission is often of concern to Optimus Prime, but Downshift generally follows orders, however grudgingly, because deep down he knows this truth: the unending Autobot resistance is preferable to a rapid Decepticon victory.

Since becoming a safety agent on Earth, however, Downshift has become something of a cop on the edge. Striving to protect his new-found heaven, he plays by his own rules, much to the dismay of his commanders. As a security officer, he's often assigned to protect important facilities and people, but his "intuition" often leads him into hunting down suspects, leaving his charges unguarded, especially if he perceives human children to be in danger. Despite this, he's a highly skilled armed and unarmed combatant, and is extremely devoted to his job... or at least, how he interprets it.

In robot mode, Downshift carries twin ground-to-air rocket launchers on his shoulders. The rockets use magnetism to guide their path, limiting them to mostly iron and steel targets, such as Decepticons. The launchers can also be used while he's in his flying-car mode, making Downshift a very effective covert warrior. In either mode, the rockets can travel up to 30 miles and pack the explosive equivalent of a half ton of TNT. He also wields a "rust rifle" which shoots a stream of powerful liquid oxidizing agents. A blast of this can seriously harm and debilitate a metallic foe.

Downshift's weapons are mostly ineffective against non-ferrous materials, a fact that can be used to his disadvantage by an opponent. His soldierly instincts are often hampered by his erratic behavior and sullen moods.

Like the rest of the Omnibots, Downshift was active on Cybertron during the Ark's four-million-year sleep, and only travelled to Earth after their reactivation.

Downshift is usually part of the security force at Autobot City, although he is currently assigned to Iacon.

Downshift transforms into a white Toyota Supra (or as it was known in Japan at the time, Celica XX) sports car.

Downshift is available for application. In the meantime he is being temped by BZero.