This page is for the current Joe medic, Doc. For the original Doc, see Carl Greer. 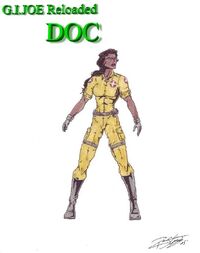 DOC GREER is a prominent doctor who has worked for the Center for Disease Control. She is a talented risk-taker, and has gotten far through a mix of intelligence and strength of will. She is inspired to succeed by the memory of her uncle, who was an Army doctor until he was killed overseas. Dedicated to protecting the public health and safety of the American people, DOC GREER works with state health departments and other organizations to enhance policy-making and promote health. Greer focuses her attention on developing and applying disease prevention and control (especially in the case of infectious diseases), and is also skilled in environmental health and education. While she is primarily a healer, she is also a Captain in the US Army, and has self-defense training to defend herself if provoked. Rounding out her skills and demonstrating her spirituality, she is also trained as a Chaplain Assistant.

Doc is the code name used by U.S. Army Captain Carla P. Greer, born in Concord, Massachusetts. Carla was the niece of the G.I. Joe team's original, now deceased medic, Carl "Doc" Greer. She graduated from the Wayne State University School of Medicine and began her residency at a inner-city Detroit hospital. After growing weary of the gang violence that represented the bulk of emergencies that she treated Carla decided to follow in the footsteps of her uncle. After enlisting, she graduated at the top of her class from the Army Medical Department's Officer Advanced Course. After four years as special operations medic, she left the military to work at the Centers for Disease Control.

Doc Greer got involved with G.I. Joe in 2002 after the re-appearance of her dead uncle, Carl Greer.

Her codename and uniform choice are a direct homage to her fallen Uncle. She chose it to honor him, and did so with the approval of the Joes that knew her Uncle.

Doc was assigned to Walter Reed Army Medical Center from July of 2007 through June of 2008.

In 2020, Doc was called in to study Villetta Rose.

In May of 2022, Doc suddenly dramatically changed her appearance, and started acting more coldly towards her fellow Joes.

Doc Greer is inspired by a character from GI Joe Reloaded.

"Doc II: Carla Greer, neice of the original Doc, makes a better replacement for him than even Stretcher who was barely more than a Doc clone to begin with. Created for the alternate reality of GIJoe Reloaded, Carla has been integrated into the original continuity via a Convention exclusive figure, and a mention in America's Elite. Only fitting that a fallen Joe be replaced by his own kin. "

When Carla Greer was first introduced to the MUX, it was implied that she was the original Doc's little sister. As it's been established since then that canonically she's Doc's *niece*, we've since retconned her familial relationship to more closely reflect canon.

Also, our Doc Greer is based more on the kick-ass Reloaded character, as opposed to the dopey-smile pacifist of her later-issue filecard.

Second Lieutenant Lori Henshaw has recently awoken from her coma, the result of injuries sustained when a Cobra Night Raven's heat-seeking missiles targeted the engines of her Conquest X-30 while preparing for liftoff during Cobra's attack on Fort Hood and the Pit in August of last year. The prognosis, however, is concerning: microscopic shrapnel traces are still lodged in her chest, dangerously close to her lungs and heart. Courtesy of G.I. Jane, an electromagnet breastplate is holding the shrapnel in place, but it is rather bulky and unwieldy.

While she seems stable from a medical standpoint, there are concerns that she may have psychological trauma as a result of her near-death experience, although she is doing her best to hide it. I would suggest that Psyche-Out conduct a psychiatric evaluation as soon as possible. Regardless of those findings, I fear that further military duty will not be an option for her, and that proceedings for a medical discharge will be called for in the near future.

Currently, Lt. Henshaw is recovering at the Wilford Hall USAF Medical Center, Lackland AFB, Texas - it was the closest facility for medical treatment following the attack on Fort Hood, and given the severity of her injuries, moving her was out of the question. Her mobility is currently limited, due to the electromagnetic breastplate, but G.I. Jane has developed a specialized wheelchair that incorporates the breastplate functions. Visitors might do her some good; her family is present and supportive, but a sign of support from those she served with may help to raise her spirits during this troubled time.

Doc Greer was introduced to the MUX and is currently played by BZero. However, she is available for application should anyone wish to play her full-time.