This page is for the heroic Shattered Glass Decepticon communicator. For her evil main-universe counterpart, see Discretion. 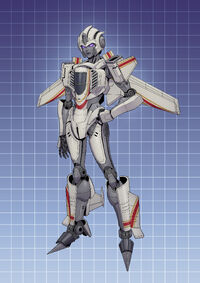 DISCRETION is the communications officer of the Dominicons, and is charged with keeping their information lines open and free of Autobot scrutiny. The oldest of the Dominicons, Discretion is nonetheless up on all the most recent technologies, and was welcomed into the Decepticons for her technical and scouting abilities. More hardened than her teammates, Discretion is pretty gruff at first, but warms up once you get to know her. Once you get her going, she'll talk for hours, unmindful of the glassy stares of those trapped in her geeky buttonholing. Thusly, she gets along better with other gearheads than the cagey intelligence types. In robot mode, Discretion has keen senses and several communications skills, although she's not much good in combat. In jet mode, she can build up static electricity in her wings, and fire it as a concentrated blast to take out enemy com towers. As a member of the Dominicons, Discretion combines with her teammates to form Taracon.

Discretion is a founding member of the Decepticons, and was the first Decepticon to be hand-picked by Illarion to form the Dominicons.

Discretion was part of Illarion's team even before they came to Earth. In 2013, all Earth-assigned Seekers were brought to Cybertron to help defend Polyhex. In 2014 she returned to Earth. Later that year all the Dominicons began the process of being upgraded to a combiner team. In 2015, she witnessed a battle between Knightmare and Megatron. When Starscream intervened, the Domincons merged for the first time to form Dominicus. Megatron, however, showed his even greater power as he dispatched the combiner with one shot of his anti-matter cannon. After that, the Dominicons left the Decepticons and took off on their own.

Discretion transforms into a black Decepticon jet. She sometimes monitors the IRC channel as "Auditor".

While Discretion has a sometimes-player, she is currently available for application.