This page is for heroic Shattered Glass Conehead Ramjet. For his evil main-universe counterpart, see Dirge. 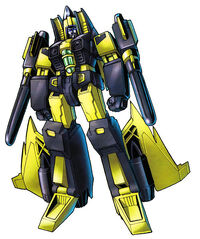 Dirge is a constantly sunny and smiling optimist. He's determined to see the bright side in everything, especially when there is no bright side. It's his mission in life to bring happiness and laughter to everyone, even if he has to use his emotion-controlling ability to force his enemies into it. His fellow Mayhem Suppression Squad members find it all just a little bit disturbing.

Dirge's eternal optimism led him to believe in Alpha Trion's words about a Cybertron at peace without question and join the Old One's faction. He doesn't have any problems with his infiltrating the Decepticons on his leader's behalf, as he thinks that one day they'll thank him when Alpha Trion's plan succeeds in turning Cybertron into a utopia.

While defending innocents during a surprise raid by the Autobots, Dirge was defeated by Jetfire, and photographed with Jetfire standing triumphantly over him, and holding Dirge aloft over his head in victory. Dirge was then held in the POW pens until his sentence of public execution in the Smelting Pool could be carried out. Rescued by Scourge, Dirge currently active defending civilians from recent Junkion attack.

Dirge is available for temping for the Shattered Glass TP.