This page is for the evil Decepticon Dirge. For his heroic Shattered Glass counterpart, see Dirge (SG). 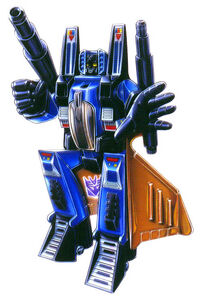 The chilling rumble of Dirge's engines as they approach from a distance is merely a prelude to the petrifying fear they induce in whomever is unlucky enough to hear as they pass overhead. And fear is something with which Dirge is quite familiar. He knows its all-consuming power; he understands how it can defeat even the mightiest of armies. He handles it with the same exacting proficiency that a concert pianist handles his piano's keys. Even his fellow Decepticons are put off a bit by his mournful, silent manner. Ramjet sums up everyone's feelings: "He gives me the creeps."

In jet mode, the sound from Dirge's engines has the uncanny effect of producing spine-tingling (circuit-tingling, in the cases of other robots) fear in nearly everyone who hears it. Apparently, the engines emit a combination of frequencies that has a disorienting, fear-provoking effect on the nervous systems of all those within earshot. He also carries two air-to-air missiles and two automatic machine guns.

In order to perform well as a warrior, Dirge needs to feel that he's in control of a situation. When things get out of hand, Dirge is prone to suffer from the very weapon he himself wields so effectively - fear. Dirge's usefulness evaporates under these conditions.

His first notable activity on Earth was joining in a raid on Dinobot Island, where he was eventually chewed on and thrown bodily by a time-lost Tyrannosaurus rex. Dinobot Island, Part 2

Dirge served as part of Megatron's personal guard when the Decepticons confronted the Constructicons about their dubious loyalties. The Master Builders He was also briefly involved in an aborted air strike to seize the Negavator, and was present for the next raid on the Negavator's holding pen. Once Red Alert rigged the Negavator to explode, however, Dirge led his fellow Seekers in retreat, against Megatron's direct orders. Guess he didn't feel like dying that day. Auto Berserk

When a new solar energy facility opened up in Central City, Starscream led Dirge, Ramjet and Thrust to steal its power. The facility proved to be a trap, however, set by Shawn Berger to elevate himself in the public eye by taking down the Decepticons with his private militia. Berger's operatives failed, but the Autobots soon arrived to engage the Decepticons as well. Tracks took to the air and zapped Dirge with his blackout beam. Luckily for Dirge, Ramjet managed to pull off a loopity-loop and ram the flying Autobot into the ground. Megatron then "requested" the pleasure of Shawn Berger's presence, not to punish him, but to play a subtler game. He attempted to convince the industrialist that the Decepticons were good, and the Autobots evil. He had Dirge escort Berger home so that the human could think about his proposal of alliance against the "Evil Autobots". Dirge was also one of the key players in Megatron's staged videos to tarnish the Autobots' reputation. Megatron's Master Plan, Part 1 Later, after the Autobots were successfully vilified in the public eye and exiled to deep space, the Seekers turned on the people of Central City, opening fire in the middle of the streets. Although Dirge and the Seekers fared well against an attack by the Air Force, the eventual return of the Autobots proved to be more than the Decepticons could handle. Megatron's Master Plan, Part 2

When the Decepticons uncovered a pool of electrum, a strange element that rendered them totally invincible to harm, they thoroughly enjoyed taunting the Autobots with their superiority. Dirge, unfortunately, drew the short straw and was left to guard the pool with Long Haul, right up until the Constructicon abandoned him to go fight the battle as well. Dirge was in the middle of...*ahem* exhorting Long Haul's virtues when Beachcomber and Seaspray jumped him from behind, giving the Autobots a chance to use the electrum pool as well. The supply was quickly exhausted with both armies using it, however, reducing the war back to stage one. The Golden Lagoon

Dirge was also part of Megatron's team working with the Insecticons, producing energon cubes from the insects' feasting. They were eventually defeated by the Autobots and a grove of robotic space plants called Morphobots. Quest for Survival

Later on, Dirge, Ramjet and Astrotrain came to Monacus to look after Megatron's interests in Sheol, and his less than reputable partner, Lord Gyconi. They were putting the squeeze on Gyconi when a program caught Dirge's optic, inviting one-and-all to see the Autobots in pit battle against Gyconi's animaliens. They decided to take in a show while on Monacus, but quickly realized what was going on when Smokescreen flooded the arena with smoke to stop the games and save his friends. Dirge and Ramjet set off after the Autobot in jet mode, and very nearly destroyed him before the bounty hunting Autobot named Devcon stepped in to blast them out of the air. There's nothing a Decepticon fears more than a fair fight, and the two Seekers skedaddled as soon as they were able to get back in the sky. They retreated back to Astrotrain with their share of Gyconi's energon, and eventually fled the planet, with Devcon chasing their smoke trail. The Gambler

On another occasion, Dirge accompanied Megatron to help their ally Deceptitran against the Tlalakan rebels. After the Decepticons captured Bumblebee (who was aiding the rebels), Dirge was eager to try out his mind probe on the little Autobot, but was interrupted by a rebel attack before he could really get into it. Sea Change

When the Triple Changers temporarily disposed of Megatron and Starscream, Decepticon leadership became a free-for-all. Instead of choosing sides like the Constructicons, Ramjet and the Seekers were mostly content just to watch the hilarity ensue, like Blitzwing's football antics and Astrotrain's army of idiot trains. He even actually avoided death for a change and was seen successfully escaping from a train tunnel flooded by Astrotrain's Astroforce. That must have made his day. Triple Takeover

Megatron said Dirge and the other two Coneheads were "supposed to be the most powerful jets in the galaxy." The Girl Who Loved Powerglide But if Megatron was serious, then they certainly didn't do much to live up to that reputation. They were loyal enough troopers, participating in all the usual Decepticon mischief, but not much more than that. Dirge was once ordered to transport an unknown invention stolen from Wheeljack's lab on Cybertron to their home base, and ended up crashing in a swamp and temporarily deactivating due to its weight, prompting the other coneheads to save him. Hoist Goes Hollywood In fact, the general incompetence of Dirge and the Seekers in the air was one of the reasons Megatron chose to try fighting the Autobots on the roads with the Stunticons. The Key to Vector Sigma, Part 1

Dirge and Ramjet were briefly seen using Megatron's Lightning Bug in defense of the Decepticons' undersea base. Cosmic Rust The two were later captured by Starscream and the renegade Combaticons, and pilfered for their energy absorbers. Starscream's Brigade Still, Dirge was repaired rather quickly, and was seen helping Megatron and the Insecticons in another joint scheme soon thereafter. He and Ramjet were commissioned to find the Insecticons when Shrapnel stole a vital part of the space bridge machinery. The Revenge of Bruticus During a Decepticon mission in the Middle East, Dirge inexplicably showed up with the Combaticons just long enough to get shot down by the Autobots. Aerial Assault

In 2007, Dirge was assigned to Cybertron Security.

Dirge is currently assigned to protect the rebuilding of Polyhex. He was downed in the battle against the Quintessons, but was later found and recovered.

Dirge last had a permanent player in August of 2012. In May of 2015 he was taken over by Imager, but is still available for application.