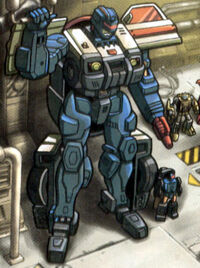 "Everyone is guilty of something.”

RED ALERT is Field Director of Autobot Security and oversees the day-to-day operations of their secret police as well. Rumor has it that more Autobots have died in Alert’s interrogations than have been killed by Decepticons, and that Alert never loses his cool, detached demeanor even as he’s killing a trusted friend for suspected treason.

Paranoia is the character trait that makes Red Alert as good as he is at his job. Nothing escapes his notice - a whiff of smoke, a whisper of crackling electricity, a faint scent of fuel exhaust. Anything, no matter how small, that triggers his sensory circuitry directs his thoughts immediately to the expectation of trouble. Most of his comrades find his edgy, driven nature an unwelcome presence among their ranks, but almost all fear garnering his unwanted attention. "He may have a few wires crossed in his logic center," says Inferno, "but his optical sensors are looking straight ahead. Better gone than 'Con."

Red Alert can trigger an electronic alarm on each of his fellow Autobots. His sensory perception is excellent. His visual acuity is such that he can pinpoint a 2 cm microchip at 1200 feet. He can hear a pin drop - at a distance of 1.4 miles! And his olfactory module can detect odors as weak as 2 parts per million. In vehicular mode he is among the fastest of the Autobots. In robot mode he carries a shoulder-mounted rocket launcher that has a 25-mile range, and a high-energy particle beam rifle.

Red Alert's paranoia and nervousness make him susceptible to rash judgments. Consequently, his actions can be injurious to both himself and his fellow Autobots, if he's not careful. Luckily for him, it's usually his comrades or innocent bystanders who take the fall for his mistakes.

Red Alert killed and backstabbed his way to Field Director of Autobot Security, and seeks to replace either Ironhide or Jazz as head of Base or Personal security.

Now that Jazz has been exiled, Alert is looking towards eliminating Jetfire or Prowl as his next obstacle to advancement.

Red Alert wasn't planning to travel to Earth, and as such never acquired an Earth altmode. However, when Ricochet was delayed from joining Jazz aboard the Ark, Alert was pressed into service as his replacement, leaving Nightbeat in charge of the Autobot Secret Police on Cybertron.

Red Alert is currently played by Bzero, but is available for temping for the Shattered Glass TP.

In the Shattered Glass universe, Director Alert is head of the Autobot secret police.

Retrieved from "https://tfumux.fandom.com/wiki/Director_Alert_(SG)?oldid=73321"
Community content is available under CC-BY-SA unless otherwise noted.