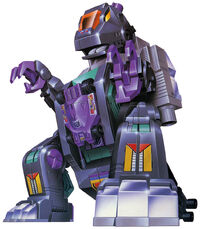 DINOSAURER doesn't stop hugging until he's called off or wading hip-deep in accidental rubble. Although capable of massive destruction, he hates to fight. When forced to do so, he’s still considered far too merciful, and is often remorseful of the damage he causes in battle – even to Autobots who clearly deserve it. The only real emotion that he is programmed to display is love, and that love is always present, only varying in intensity. He restrains his love for the Autobots long enough to fight them when necessary, but his love of his fellow Decepticons knows no bounds. Awkwardly large, DINOSAURER is extremely unsure of his abilities, continuously embarrassed at the mess he constantly creates. He has no interest in command, ever fearful of making a bad decision that cause harm to innocents. DINOSAURER expresses profound love for everyone except himself – he forgives everyone’s faults but his own.

In giant purple dinosaur mode, DINOSAURER has incredible strength and is virtually impervious to attack. A rocket backpack allows him to jump a distance of 20 miles in atmosphere, and allows him to achieve escape velocity into space, where he has interstellar and FTL capability. He can shoot heat-seeking plasma bombs from his mouth and carries a particle beam cannon within his sinus cavity. His optical sensors shoot high frequency hypno-beams that, when locked on to another Transformer's optic units, carry powerful electromagnetic currents, overriding their target's own mental processes, filling them with such overwhelming feelings of happiness and love that they become unable to fight. In reference to an obscure Earth-transmission that DINOSAURER loves, he calls the beam his "Care Bear Stare." If the intended victim is strong-willed enough or manages to turn away from DINOSAURER's gaze quickly enough, he can avoid this fate. In outpost mode, DINOSAURER opens up to reveal landing and repair bays for up to six Decepticons, and a communication center with antennae for local and interstellar transmissions. An anti-gravity repulsor disk at each end prevents anyone from approaching closer than 1,000 feet unless DINOSAURER chooses. Rotating scanners on top of the city can blast a hole through a city block of buildings. In mobile battle station mode, DINOSAURER is perhaps at his most dangerous. He can attain a speed of 800 mph with a range of 8000 miles and is armed with a laser cannon, rotating blasters, destructo beams, and dual photon launchers. However, his extreme anxiety at harming any living creature prevents DINOSAURER from using his weaponry very efficiently in combat.

In the year 2006, construction on Dinosaurer secretly began on Cybertron by the Constructicons (with help from Octane and under the direction of Shockwave), as an experiment granting sentience to wild creatures of Cybertron. Dinosaurer's gestalt-sized altmode was just an extravagance on Scrapper's part. 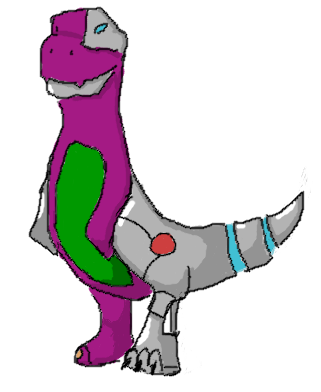 Dinosaurer was constructed in the Manganese Mountains in time to launch with the Nemesis interceptor. However, since arriving in Earth's orbit, he'd been largely confined to the cargo bay due to his massive (gestalt) size.

When the Nemesis was attacked by GODS and crashed in Oregon, Dinosaurer was the only one to survive the crash largely intact. Crawling from the wreckage, he kept watch over the Nemesis until Megatron's self-repair systems brought him back online to repair the others.

In 2018, the Autobots launched an attack on Decepticon City, severely damaging Dinosaurer.