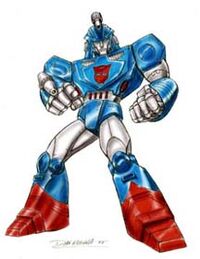 DEVCON is the single Autobot who most haunts the offline processes of Decepticons throughout the Galaxy. He is one of the very few successful -and operational- bounty hunters from what remains of Autobot society on Cybertron. He left Cybertron during the Third Great War, to pursue Decepticons who fled to sow seeds of conquest throughout the galaxy. An introverted loner, DEVCON has spent literally millions of years in the pursuit of Decepticon fugitives. He is doggedly determined to hunt them all down, one by one, and bring them to justice. He is an Autobot of few words, preferring to let his actions speak for him -- which they do, most often very clearly. His strength is considerable, but it his endurance that has become legendary among the ranks of Decepticon fugitives. In the pursuit of his prey, it seems as if he is capable of functioning forever, with little or no need to rest and refuel. In actuality, DEVCON's internal power circuitry is among the most efficient of all the Transformers. It enables him to conserve considerable amounts of energy over long periods. He will often defeat his quarry simply by outlasting them. DEVCON carries a powerful plasma blaster mounted on his right arm, capable of pulverizing a 6' x 6' x 6' concrete cube. The independently targetable laser cannon mounted on his head can hit a moving Decepticon from over two miles away. In his space cruiser mode, he is capable of of achieving escape velocity and long-range interstellar flight. Due to his solitary lifestyle he has become increasingly disassociated from his fellow Autobots. Though an extremely formidable opponent, DEVCON is uncomfortable working in groups, and is almost incapable of asking for help from others.

Devcon is a bounty hunter feared by Decepticons across the galaxy. Once while attempting to collect a bounty on Dirge, Astrotrain and Ramjet. Meeting up with Smokescreen, he discovered Smokescreen's allies, including Optimus Prime, had been captured by Lord Gyconi, a local shady businessman. Realizing the Decepticons and Gyconi were in league, the two teamed up against their common foe. The two tracked down and engaged the villains in a firefight. Outnumbered and outgunned, they were saved when Gyconi's assistant Slizardo betrayed him, allowing them to capture Gyconi and rescue the other Autobots from Gyconi's pit fights. Devcon then teamed up with Slizardo, offering him a partnership to apprehend the Decepticons.

Devcon's work has brought him to Earth on occasion. He still works with Slizardo periodically, who can often be found on Vilnacron Station should Devcon's services be required.

Devcon flew escort for the ill-fated maiden voyage of the Spirit of Freedom.

The bounty hunter looks worse for ware. His face has claw marks, part of his helm looks like it has been sliced at, and though he is being patched up, here he is making a report...

"Went to go chase after Coldsnap who was causing a ruckus in the human city area somewhere near New York, however Scourge decided to drop in and say hello. Coldsnap got lucky in that regard, as my attention was then turned and focused on Scourge."

There was a brief pause as the bounty hunter pinches the brim of his nose in annoyance. Ignore probably the pain from his face, even as he spoke. "No one was harmed in the city, however due to the degree of the fight, it didn't go according to plan."
Those sapphire blue optics then look at the camera once more a hint of disgust in his voice, "A few buildings got wrecked in the fight, one got demolished, and a few cars got claimed that were empty. Scourge was chased off, but not without the cost of property damage."

Devcon then shakes his head before he glances away then back at the camera once more. Lugnut can be seen giving an annoyed look at the camera in the background since he was attempting to /try/ and patch up the major impact marks but hard to do so long as the bounty hunter was filming the report. "I should end this report before I tick off a medic. I got a feeling though Scourge may be tracking me down later for a return in harming his pride. He is a mad dog, I wouldn't expect anything less of him, and yes.." he then faintly smirks, "..I'm here in the area for good."

Then the video feed ends.

<<Back to Autobot Spinny!>>

Devcon is currently available for application. As of 2015 he was temped by Ty, until The Spirit of Freedom TP, in which he will be temped by Starfire.

In the Shattered Glass universe, Devcon is a chatty, flippant bounty hunter who works for Prowl's Secret Police.