View source
The name or term Devastator refers to more than one character or idea. For a list of other meanings, see Devastator (disambiguation). 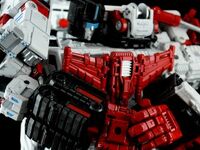 Awesome and impressive, DEVASTATOR was the strange result of the six Constructicons - Scrapper, Scavenger, Bonecrusher, Hook, Long Haul and Mixmaster - joining together to form a single giant robot. He was graceful and nimble, the spirit of creation in its purest form - a mechanical being whose sole purpose was to build and protect all of Cybertron. Devastator's mind was truly unique and his own, a melding together of his six components, combining their creativity and genius into a true gestalt. The carrying out of complex thoughts was enhanced by their networked minds. Thus, Devastator was seemingly a creature of almost pure intellect - usually contemplating the full consequences of his actions before he moved to act. These actions were usually multifaceted, efficient, and devastatingly beautiful.

Devastator had many of the abilities of his component parts, enhanced by his superior mental functions and powerful form. He was over 60 feet tall and had incredible strength - he could lift a bridge with one hand, steadying it for repair with the other. His solar energy welder shot a 10,000 degree centigrade heat beam precisely where Devastator needed it, and could be used as a weapon if innocents were in danger.

Devastator was fast and agile, and with the awareness of six minds, difficult to trip up. The ability of his six component parts to seamlessly cooperate enhanced his mental functions, allowing him to easily outfox most opponents.

The Constructicons did not initially have the power to merge into Devastator. That ability was given to them by Megatron after Optimus Prime tried and failed to twist their minds into servitude with the Robo-Smasher. The two Constructicons Optimus did change, Hauler and Grapple, used their friendship with Omega Doom to lure him to Prime, who used the Robo-Smasher to warp the guardian robot's mind. Prime succeeded and created a burning desire for destruction in Omega. To counter this, Megatron gave the power to merge to the remaining six Constructicons, giving them the cooperative power to rebuild almost anything Omega could destroy.

Devastator remained a protective force in Cyclonus's arsenal, dedicated to making sure no other city on Cybertron meets Crystal City's fate. He later defended civilians from Junkion assault.

In 2016, Scrapper, Hook, and Long Haul were killed by Autobots en route to Earth, indirectly killing Devastator as well.

Devastator was controlled by the Constructions' players.