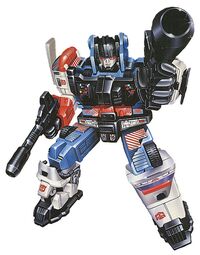 The combined form of the five Protectobots Defensor exists specifically to safeguard human life. In many ways he feels about the human race the way a parent would their children and he would give his life away in an instant rather than let one human come to harm. Defensor is emotionally attached to humans on a level that sometimes worries his fellow Autobots. He identifies with them the same way a sheep dog would with its flock or a puppy with its human owners. As far as Defensor is concerned the humans are his "kind." Sadly the titanic robot giant's attempts at personal interaction and friendly exchanges with humans tend to fail. We humans tend to be more wary and frightened of his alien nature and great size than Defensor can understand. Despite this, Defensor is fairly well adjusted mentally compared to almost every other gestalt.

Defensor is incredibly strong - he Can lift 300,000 pounds with one hand. He is also Impervious to most artillery. Defensor's most notable ability, however, is a powerful force field he can create within 50ft of his person. However, it is very fuel consumptive and he cannot maintain it for long. He also Carries twin fireball cannons which can shoots 2000 degree bursts of blue fire 1.5 miles.

Defensor once reduced Bruticus to scrap with a single shot, dryly noting afterwards that "there's junk all over the street." Later, he attempted to defend the Autobot headquarters against Decepticon attack by using his forcefield, which almost immediately failed. He was blasted back into his component parts by the Decepticons.

Defensor is most often used to protect human civilians during autobot/Decepticon encounters.

In 2020, Defensor was used to help free the Combaticons from Megatron's loyalty programming.