View source
This article is about the Devilcon thug - for the Sweep, see Dredclaw.

This page is for the evil Decepticon Deathclaw. 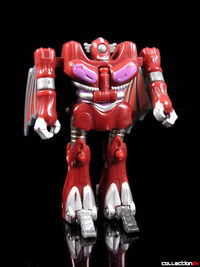 DEATHCLAW is the resident medic aboard the Decepticon exploration vessel Cronos, but don't be fooled. Healing is an afterthought for this cruel and sadistic doctor, whose primary motivation for his profession is to conduct inhumane experiments on his "patients" and record their terrified reactions for his own amusement. But as the war raged on, Deathclaw found himself growing tired of playing with Autobots, neutrals, and the occasional unlucky fellow Decepticon, and joined the Cronos crew in hopes of finding exciting new species to practice on, perhaps even rekindle his cooling love of unethical surgery. He brought along another Decepticon as well, a close friend called Deep Blue, though their relationship might more accurately be described as a master and his pet. Many of Deathclaw's victims now provide "treats" for the cannibalistic Deep Blue as well as spare parts for the rest of the crew, and it's become common knowledge that the two have a deep, albeit very twisted, bond. In battle, Deathclaw makes use of a two-pronged polearm resembling an Earth weapon known as a "sasumata", good for pinning down unfortunate victims. His altmode resembles some form of horned flying creature with bat wings and two large, brutal pincers.

Available for application as an FC.